How To Bet On New York Knicks 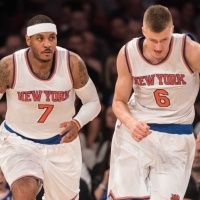 The New York Knicks have been taking their lumps for a long time. They are one of two Eastern Conference teams that hasn’t seen the playoffs in the last five years and they start this season with a new coach and general manager. But before you write off on the Knicks, this is a proud and storied franchise with fans in the Big Apple and throughout the U.S. The team, which was founded in 1946, is one of two NBA franchises located in New York City. While the Knicks call Manhattan home, their neighbors — the Brooklyn Nets — play in Brooklyn.

Don’t just eliminate the Knicks from your betting picks on any given night. Even though the Knicks have had a lousy record over the last decade, they are a team that consistently scores over .500 against the spread on the betting line.

The Knicks, who are one of five teams in the NBA’s Atlantic Division, may continue their playoff drought because they’re without their best player — power forward Kristaps Porzingis, who suffered a torn ACL earlier this year. But that doesn’t mean GM Scott Perry and head coach David Fizdale have given up on the season with a solid nucleus of guard Tim Hardaway, center Enes Kanter and point guard Trey Burke picking up some of the slack.

The Knicks have also had a solid home record at Madison Square Garden the last few seasons, so even NBA powerhouses have to take this team seriously on a visit to New York.

Patrick Ewing and the Knicks were one of the elite teams in the 1980s and ’90s. Along with that success came some serious rivalries — like divisional matchups against the Philadelphia 76ers and Boston Celtics, or one of their perennial playoff opponents in the Miami Heat.

My Team's Next MatchNew York Knicks

This is the 73rd season for the NBA. The regular season generally runs from October to April, with each team including the Knicks playing 82 games.

The Knicks regular season is highlighted by two holiday matinees — Christmas Day against the Milwaukee Bucks and Martin Luther King Jr. Day against the Oklahoma City Thunder. The team will play a total of eight afternoon games at home this season. As part of the team’s 41-game road schedule, they travel overseas to London to take on Washington on Jan. 17 — the franchise’s third trip to the United Kingdom.

The Knicks had a dismal record (17-35) against conference opponents last season and were 6-10 against divisional foes.

The Knicks are one of 15 teams in the Eastern Conference. These standings help bettors pick out the Knicks’ overall position as the top eight teams in the conference make the playoffs. Other stats offered in this table include points scored, allowed and win percentage.

The Knicks are likely in for a bumpy ride throughout the season. It’s difficult to be counted on as a legitimate contender in the Atlantic against the likes of the Toronto Raptors and Boston Celtics without a bona fide star. Hopefully that changes when Porzingis can work his way back into the lineup.

New York is off to another slow start this season, but they managed to put together a winning streak in November — with victories over the Boston Celtics, New Orleans Pelicans and Memphis Grizzlies.

In the last decade, games involving the Knicks have scored under the totals betting line the majority of the time.

Here are some other important stats and trends to look for when deciding on your wagers:

All of these options will help a bettor make an educated decision on whether to “play” the Knicks in their next game or not.

There are three basic bets offered on all NBA games at online sites like Bovada — the money line, point spread and over/under totals.

Money line betting is simply wagering on the contest based on a given price rather than a point spread. The team wagered on has to win the game outright, regardless of the score.

Let’s use this game as an example for money line betting: The New York Knicks (+130) are on the road to take on their cross-town rivals, the Brooklyn Nets (-150). The Nets are favored by 3.5 points with the over/under betting line set at 214.5 points.

A total, or over/under, bet is a wager on the total number of points scored by both teams in a game. Oddsmakers set the mark and the bettor decides if the total will be over or under the betting line.

Online sites also offer proposition bets on each game, which include predicting the score after each quarter, how many points a certain team will win by, alternative point spreads, and many more.

There’s also future betting on whether the Knicks will win the Eastern Conference or the NBA Finals. Even though future odds change throughout the season and playoffs, your odds are fixed when you make your bet on the Knicks.