Betting on where a team will finish in the 2017-18 English Premier League allows you to place wagers on markets such as who will finish rock bottom of the league table, who will finish in the top 10, the top six, the top four and the top two positions in the league. While the betting lines tend to be smaller for these markets, you have an increased chance of winning due to your selection being able to finish in more than one league place.

Newly promoted Huddersfield Town are +175 favorites to finish bottom of the Premier League this season and I cannot find an argument against this. Town were the only team in the Championship’s top 12 teams to finish with a negative goal difference. They have strengthened their squad but the signings have mostly been uninspiring and they will struggle against Premier League opposition. The only other team I’d consider to bet on finishing bottom would be Brighton and Hove Albion at +400. If you can bet on being relegated, go for Huddersfield, Brighton and probably Swansea.

Betting on a team to finish in the top 10, which is the top half of the Premier League table, is easy if you back the short priced teams such as Everton (-700), Southampton (-175) and Leicester (-110) but the better odds are given to teams outside those practically nailed on for a top half finish. I like the look of West Ham United at +170 as they have acquired goalkeeper Joe Hart and forward Marko Arnautovic so should be stronger than last season. A longer shot would be Palace at +300 although it remains to be seen if new manager Frank de Boer has what it takes to cut it in the EPL.

If you’re looking to bet on who will finish in the top six this season then this market is not exactly profitable. The top six sides from last season, Manchester City, Chelsea, Manchester United, Tottenham Hotspur, Liverpool and Arsenal are all odds on to do the same again this season. The only team I can see breaking into the top six would be Everton at +300 simply because they may have sold Romelu Lukaku to Manchester United but have invested heavily in other areas of the pitch and should be difficult to beat during the coming campaign. 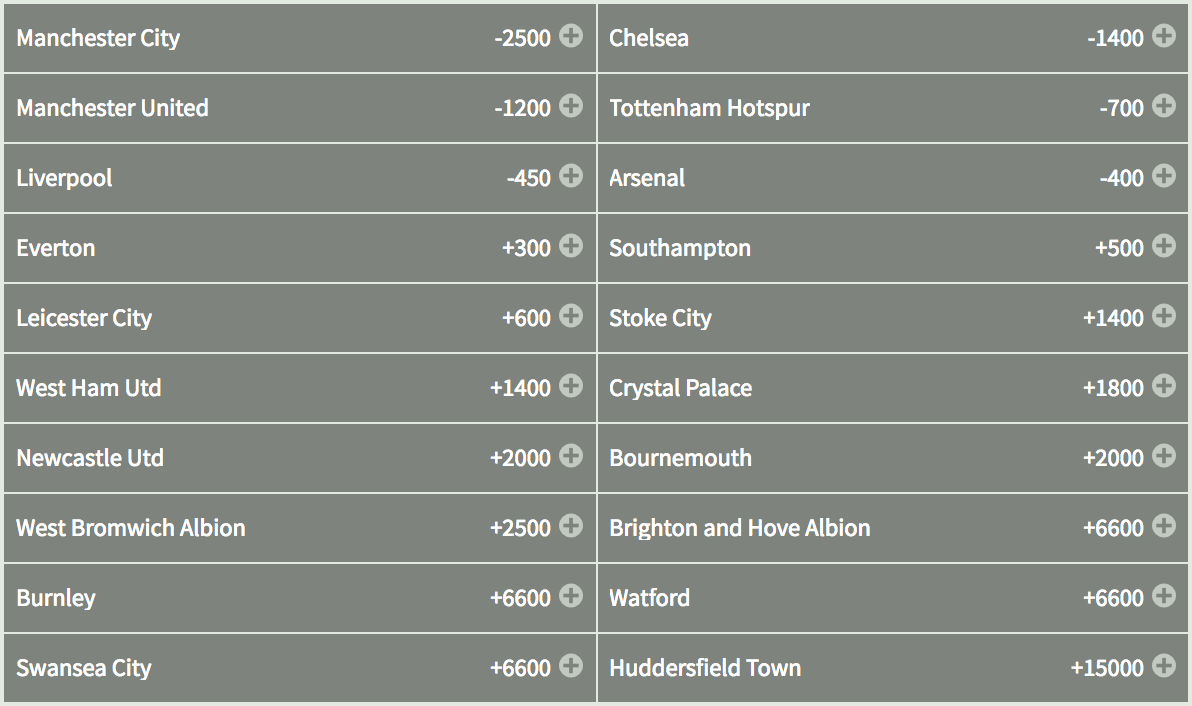 You are all but guaranteed a return, albeit a small one, if you back either of the Manchester clubs or Chelsea to finish in the top four this season due to their betting lines. I actually do not fancy Tottenham at odds of -140 because they are yet to enter the transfer market while the teams around them are spending heavily. There could be some value in backing Liverpool at -120 but only if they keep hold of Philippe Coutinho while Arsenal at +110 are a long shot considering their poor showing in the league last season.

I’ll opt for Liverpool I think as their fans are always saying that this is their year! 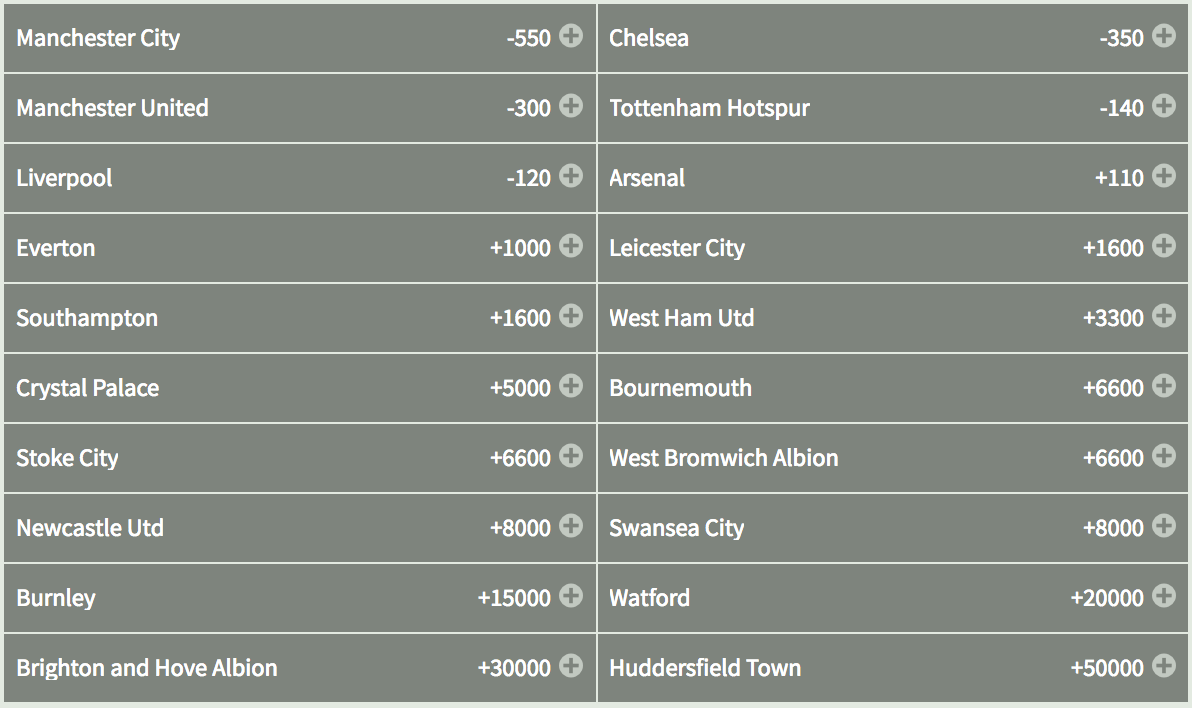 When it comes to betting on a top two finish I believe it is a three team race this season between Manchester City, Chelsea and Manchester United; I can’t see any of the other teams putting in a serious challenge. City are available at -105 and seeing how I think they will win the league this season, it only makes sense to back them for a top two finish. As for choosing between United and Chelsea, it could be something as simple as flipping a coin, although I do believe United have done the better business during the summer and everything is pointing towards it being a Man City / Man Utd one-two in the Premier League in 2017-18. 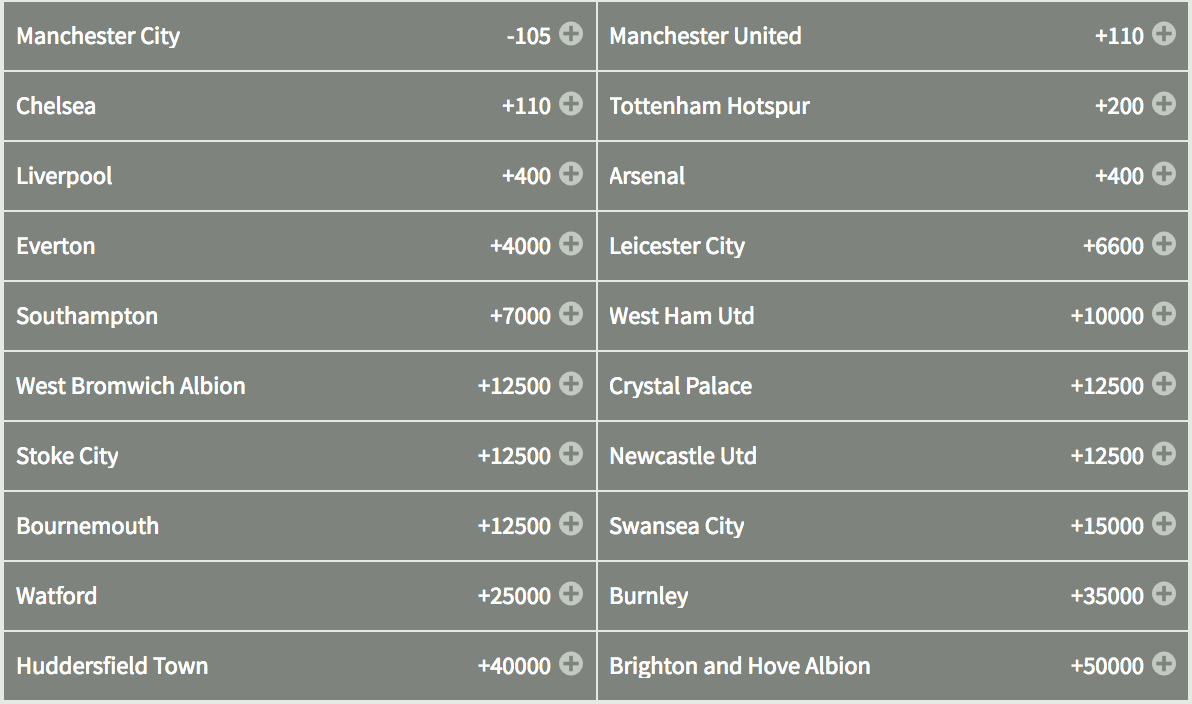 While I believe that Huddersfield Town will be the team to finish rock bottom of the league, as do the bookmakers, there is some value in betting on Brighton and Hove Albion being the bottom side this season. Brighton may have finished second in the Championship and looked like a good side, but there has been little to no investment in that promotion winning squad and I just cannot see them competing strongly in the Premier League this season. Odds of +400 look decent and I may have to have a few dollars on them and Huddersfield to edge my bets a little.

Personally, I would try stay clear of the top six and top four betting markets because the six teams who are favorites to finish in the top six will almost certainly occupy these positions at the end of the season and also have a monopoly on the top four spots, too. Instead, look at the top 10 betting market where there is more value to be had. I’ve already stated West Ham would be my side to bet, but also look at the likes of Leicester City, West Bromwich Albion and Bournemouth. Plenty of people have been writing off Bournemouth, but they have spent a decent sum of money, have a couple of players coming back from injury and manager Eddie Howe is one of the brightest talents in the English game right now; +225 odds on a top 10 finish for The Cherries could be a bargain.

Should you rather shy away from betting on these markets, the more popular betting markets are betting on the eventual Premier League champions and the overall top goalscorer markets. We have already previewed these betting markets and believe Man City will be walking away with the title while Harry Kane looks set to win what would be his third Golden Boot trophy in as many seasons.