Betting in the English Premier League top goalscorer is a popular futures bet and one that can yield decent profits if you back the right player. All you need to do it pick a player and if he scores more goals than anyone else in the Premier League, you win your bet. Some online betting sites will allow you to bet “each-way” and will pay out your bet if your choice finishes second, third, or fourth in the goalscorer charts, albeit with reduced odds. 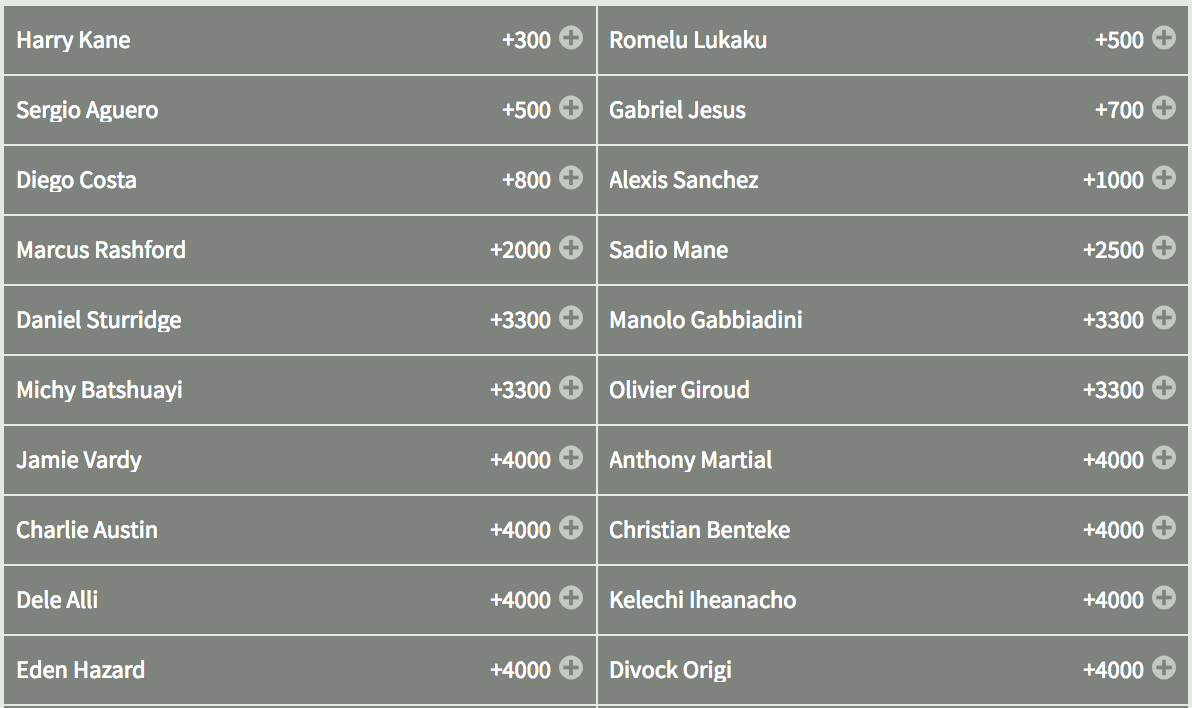 Tottenham’s Harry Kane is the bookmakers’ favorite to win what would be his third consecutive Golden Boot by being the Premier League’s top goalscorer. Kane scored 29 goals in 30 league games last season, including finishing the season with back-to-back hat tricks. The season prior, Kane banged in 25 goals in 38 games and before than he netted 21 goals in 34 games. Whoever scores more goals than Kane this season will be the league’s top scorer, mark my words.

Romelu Lukaku is second-favorite to score the most goals in the Premier League during the 2017-18 campaign. Lukaku moved from Everton to Manchester United in a £75 million transfer after scoring 25 goals in 37 games last season. Lukaku has his detractors, but I am personally a fan of his and believe that the powerful Belgian will easily score 20 goals for Manchester United this season simply because he will be given plenty of service from United’s talented midfielders and wingers. While I believe Kane will be top scorer again, Lukaku is likely to push him close.

Manchester City’s Sergio Aguero has the same +500 odds as Romelu Lukaku to be the top scorer but just outside this dynamic duo at +700 is Aguero’s team mate Gabriel Jesus. The 20-year-old Brazilian only managed 10 appearances in the 2016-17 season due to signing for City late into the season and then suffering a broken bone in his foot, but Jesus still scored an impressive seven goals and showed glimpses of why City forked out £27 million for him.

Many pundits believe Jesus will be the first choice striker for City this year, even ahead of Aguero, and if that is the case expect Jesus to smash at least 15 goals in.

You may have noticed that Diego Costa of Chelsea is the fifth-favorite to win the coveted Golden Boot with odds of +800. These odds look enticing on the surface because Costa has scored 52 league goals in 89 games but please be aware that Chelsea manager Antonio Conte has told Costa that he can leave the club and that he isn’t part of the Italian’s plans for the coming season. Costa is likely to return to Spain or head to China before the season ends, so save your money.

Another player to avoid is Daniel Sturridge of Liverpool despite him being on of the most natural goalscorers of his generation and the fact he has odds of +3300. My reasons for staying clear of Sturridge is the fact he is so injury prone and will not play anywhere near enough games to threaten the top scorers. Sturridge has played professionally since 2006, 11-years, but has only made 185 appearances for an average of 16 games per season.

With odds of +1000, Alexis Sanchez of Arsenal looks like he could be worth betting on but bear in mind that he is in the midst of speculation about his future.

Both Chelsea and Manchester City have been linked with moves for the want away Chilean who scored 24 goals in 38 games last season, but Sanchez has also been linked with a move abroad. While I believe Sanchez will stay in the Premier League, anything can happen in soccer and he could move abroad and leave your bet high and dry; bet on Sanchez if you’re not afraid of a risk.