An English Premier League winner futures bet is one of the most popular bets placed on soccer each year. It can be placed before the season starts or at any point during the campaign and lasts until the Premier League champions are crowned. Be aware that if you place this futures bet at the start of the 2017-18 season, your bet will likely not be paid out for approximately 35 weeks, perhaps more, and your chosen team has to lift the winner’s trophy for the bet to pay out. 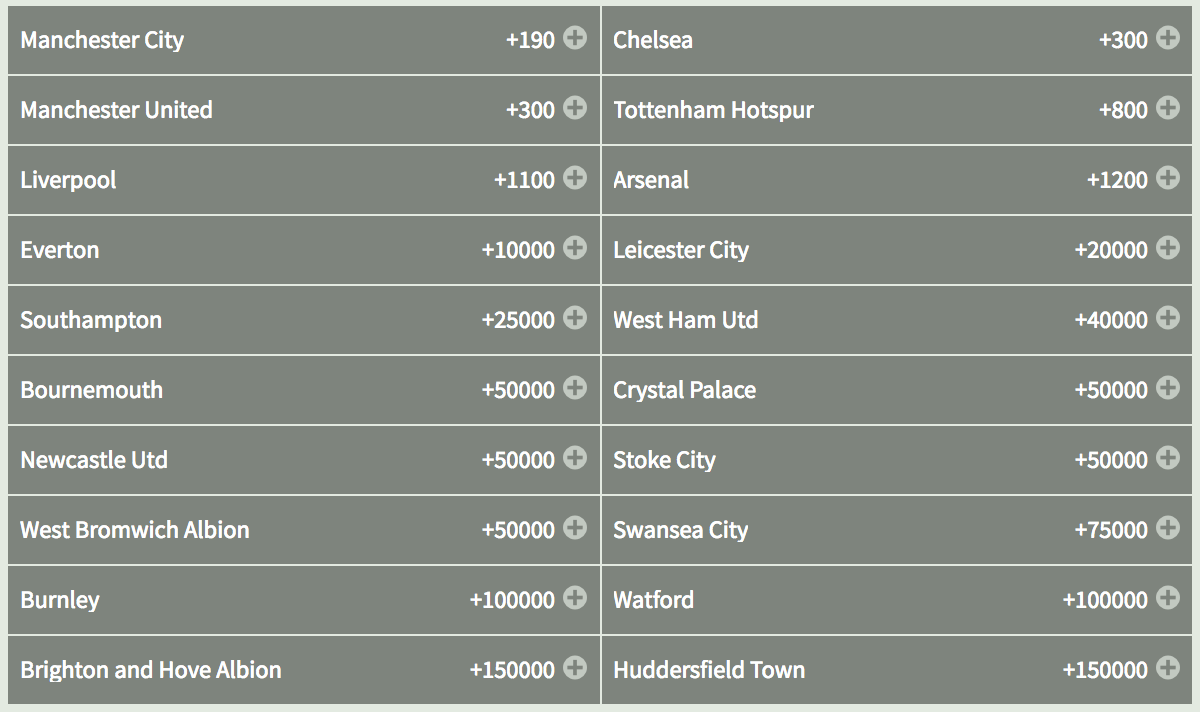 Manchester City are favorites to win the Premier League thanks in part to their excellent form at the end of the 2016-17 season. City won six of their last eight games, scoring 23 goals and conceding five. Pep Guardiola has bolstered his squad with the signings of right-back Kyle Walker, winger Bernado Silva, goalkeeper Ederson and midfielder Douglas Luiz and he now looks more than equipped to win City’s first Premier League title since 2014. A bet on City to win the title looks shrewd, although they were favorites last season and ultimately finished in third.

Reigning champions Chelsea are joint +300 second-favorites to retain the Premier League trophy and betting on them to do so represents decent value. Chelsea looked unbeatable at times during their title-winning campaign thanks to their rock solid defence and their attacking flair. Antonio Conte’s squad has been bolstered with the additions of Tiemoue Bakayoko in midfield and Antonio Rudiger in defence, but there are rumors circulating about the future of striker Diego Costa leaving the club. Costa has scored 52 goals in 89 league appearances for the Blues and if he leaves Chelsea don’t really have an adequate replacement so bear that in mind.

Manchester United have +300 odds, matching them with Chelsea, but they could be a better bet than the Blues simply because of manager Jose Mourinho. The controversial Portuguese coach has a superb record during his second seasons with clubs and this coming season will be Mourinho’s second in charge of the Red Devils. An already talented squad has been improved with the signing of Swedish centre-back Victor Lindelof and striker Romelu Lukaku, but former captain Wayne Rooney has left the club and it remains to be seen the size of the void his presence has left, likewise the departure of Zlatan Ibrahimovic, although United are thought to be considering signing Ibrahimovic on a short term deal if he recovers from his knee injury.

We have already had a look at the top three favorites for Premier League glory so it is only fair to look a little further down the list where the odds on a title victory are much longer. Liverpool can be bet on with odds of +1100 almost 10-times the odds of Manchester City, but they could be a shrewd bet. Jurgen Klopp has acquired the services of the flying winger Mohamed Salah and young striker Dominic Solanke and look close to signing Naby Keita for a club record fee. Throw into the mix Liverpool keeping hold of both Philippe Coutinho and Roberto Firmino plus Daniel Sturridge being fitter than ever, and Liverpool could be a good outside bet to make.

London clubs Tottenham Hotspur (+800) and Arsenal (+1200) may not have it in them to win the Premier League this season, but they will definitely have a major influence over where the trophy calls home for the next 12 months. Spurs are yet to add to their squad and have lost Kyle Walker, while Arsenal look set to lose Alexis Sanchez but have bought the amazing Alexandre Lacazette to replace him. If I had to bet on either of these two teams, my money would go on Spurs simply because they have finished fifth, third and second in the previous three seasons.

Although there are some huge betting odds available on some of the other teams winning the Premier League, such as +10000 on an Everton victory, try not to be tempted to waste your money on placing wagers on them. The Premier League title is likely to be contested by the six teams mentioned during this article and while tempting to put a few dollars down at odds of +10000, you would be much better off putting your hard earned money on an outcome that actually has a realistic chance of paying out. If you can find betting odds for a top six or top half finish, the likes of Everton, Southampton and West Ham United could be good teams to take a closer look at.