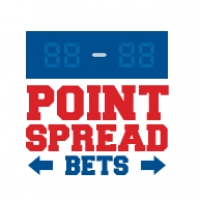 Point spread bets are the most common in the sports gambling world, in large part because they do the best job of combining potential return with straightforwardness. There's also the fact that they have been around forever—since the 1940s, to be more exact. Moneyline wagers are simpler, since you're just picking a winner, but the possible winnings aren't as lucrative. Parlay bets can help you win more money, but the success rate on these gambles is lower because you're being tasked with converting multiple predictions. [+]

Over/under investments yield similar returns, but they are a bit more complicated than point spreads because you aren't just accounting for which team among the two in an upcoming event is better than the other; there are a bunch of other factors involved, and you're ultimately betting on both teams' point totals.

Hence why everyone tends to lean toward point-spread wagers, which we are about to explain, in depth, right now.

What Is A Point Spread Bet

Let's use an NFL hypothetical as an example.

The New England Patriots are four-point favorites in an upcoming matchup against the Green Bay Packers. Should you invest in the Patriots' line, you're counting on them to win by more than four points. If you're placing money on the Packers, you're banking on them to lose by three or less points, or even win.

It's always best to make spread bets based on past information. Try finding out a team's record against certain spreads—double-digit underdogs, double-digit favorites, etc. Also see if you can separate those performances by game location (home or away) and the kinds of teams they have faced (winning or losing).

Applying those results to your next bet will first allow you to see whether the spread is a worthwhile investment. Then, if it is worth your time, you'll know whether to bet for or against a particular squad.

When To Make Point Spread Bets

Essentially, there are two different reasons to make spread bets.

First, we have your view of the favorite. Let's say the Dallas Cowboys are 10-point favorites in an upcoming date with the New Orleans Saints. Let's also say you're absolutely, positively sure the Cowboys are going to win in decided fashion. You could just invest in their moneyline outright, but as a 10-point favorite, you're looking at, like, -450 odds or something—meaning you would have to wager $450 just to make a profit of $100.

Rather than doing that, you can bet on the Cowboys winning by 11 or more points.

The return on this bet is usually close to 1-to-1, so for every dollar you bet, you can make a one-dollar profit should you win. Again, this is only smart practice if you are unequivocally sure the Cowboys are 10-plus points better than the Saints on this given week. If you think they're going to win but don't know whether they will get said victory by more than a touchdown, you'll need to consider the moneyline or placing a different bet on another game.

Conversley, spread bets are valuable when you're not totally sold on an underdog, yet still think they are going to make some noise.

Using that same theoretical Cowboys-Saints line, you could take New Orleans' moneyline, which might be +600—you'd win $600 for every $100 you bet. And yet, if you're not sure they're going to win, it makes more sense to take the 10 points they're getting. This way, should they lose, you could still end up making a profit.

Since you are dealing with roughly 1-to-1 payouts on spreads, you can also consider combining such bets into parlays in order to increase your return. This is an option with moneylines as well, but spread parlays have larger returns because of the elevated difficulty.

Which isn't to say you should always parlay your spread bets when laying down multiple wagers. You don't want to tie all of your success to accurately predicting the outcome of two, three and four or more games.

Still, it's something to keep in mind—particularly if you are studious in your research. Finding out how teams fare against certain spreads, as explained above, gives you inside track on numerous fronts, exponentially increasing the likelihood that you can strike gold in multi-spread parlays.

As another tip, be careful with spreads when betting on hockey, baseball and soccer. Goals and runs are harder to come by in those sports than points are in basketball or football. The margin of victories will almost always be lower, so when you are dealing with two-point favorites in hockey, baseball or soccer, it's a very big deal.

Moneylines are a great alternative in these situations should you not have a surefire hold on which side is more likely to cover spreads from those leagues.