You say you favor a wager on the Super Bowl? Well, you might want to stay away from the moneyline favorite.

On the surface, it's relatively easy to understand why the New England Patriots are -160 favorites to defeat the Atlanta Falcons in Super Bowl LI. The Patriots are playing in their record ninth Super Bowl. Tom Brady is a three-time Super Bowl MVP and he shares the Super Bowl record for wins, four, by a quarterback with San Francisco 49ers legend Joe Montana.

What's not to like about the Patriots? Well, for starters, they haven't proven to be a very good Super Bowl moneyline favorite. New England have lost their last two games as a Super Bowl favorite, both to the New York Giants - 21-17 as a -140 choice in Super Bowl XLVI and 17-14 as a whopping -440 pick in Super Bowl XLII.

In recent years, Super Bowl victories and moneyline favorites have come together about as frequently as United States President Donald Trump and the truth. 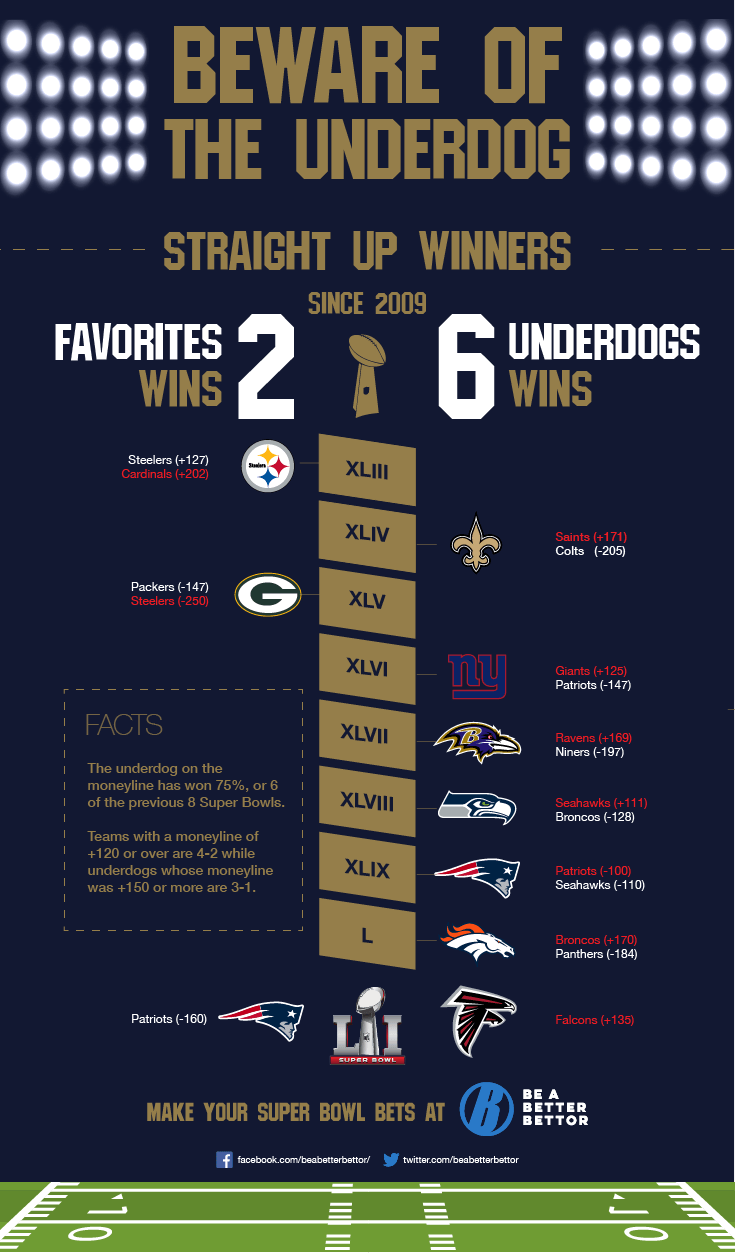 The moneyline underdog has captured five successive Super Bowls, and seven of the last nine big games. In the process, they've paid out some handsome prices, paced by the +350 the Giants delivered via their Super Bowl XLII victory. That means if you wagered $100 on the Giants to win, you took home $350.

With their 24-10 victory over Carolina in Super Bowl L, the Denver Broncos delivered a +170 payday to their backers. Those who opted to play the Baltimore Ravens at +169 in Super Bowl XLVII were rewarded when Baltimore beat the favored San Francisco 49ers 34-31. And after the New Orleans Saints dropped the Indianapolis Colts 31-17 in Super Bowl XLIV, their supporters came marching in to the tune of a +171 payoff.

It's not too difficult to make a case that the Falcons can continue this run of underdog success. At +160, Atlanta could prove a solid bet. Quarterback Matt Ryan is the overwhelming favorite to earn the honor as MVP of the NFL. His quarterback rating is an impressive 117.1, and in his last six games, Ryan has thrown 18 TD passes and zero interceptions.

On the biggest stage, Ryan has delivered the goods. He was 3-0 in bowl games at Boston College. In two NFC Championship Games, Ryan has completed over 70 percent of his passes while throwing eight touchdowns. He was only picked off once in those games.

The Falcons committed an NFL-low 11 turnovers and are 10-0 this season when Ryan doesn't throw an interception. They've yet to turn the ball over in postseason play. That's not good news for the Patriots, who were unable to force a single giveaway in either of their two losses this season.

Will the Patriots be able to contain Ryan's variety of weapons, from receivers Julio Jones, Mohamed Sanu Sr. and Taylor Gabriel to running backs Tevin Coleman and Devonta Freeman? Few teams have enjoyed any success in that endeavor this season.

Considering all he has going for him, it's not hard to envision Ryan, the man with No. 2 on his back, ending up No. 1 and continuing a recent Super Bowl trend in which the team selected to finish second has instead finished on top.