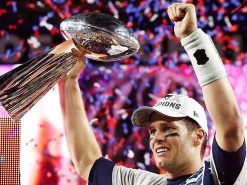 All three won numerous titles on teams that dominated the NFL in their respective eras. While several players have won four championships, only Charles Haley can say he has one Super Bowl ring for each finger on his hand. The defensive end won five crowns with the Dallas Cowboys and San Francisco 49ers.

Here’s a look at the players with the most Super Bowl victories.

How long can Tom Brady keep up his robust pace? The four-time Super Bowl champion — soon to be 40 years old — had a record-setting season in 2016 where the future Hall of Fame quarterback threw 28 touchdown passes while only being intercepted twice all season. It set a new mark for TD to interception ratio.

Those numbers have certainly not only put the New England Patriots back in the Super Bowl mix, but placed Brady in the race for most valuable player honors.

Here is a look at MVP betting odds, provided by Bet365.com

So, you’re considering taking the plunge on a football wager? Be sure to use our built in NFL widget to keep track of each team’s progross while also following the latest odds.

It seems like only recently that the New England Patriots were crowned Super Bowl 53 champions and already, the attention of the football betting world has turned to Super Bowl 54. The Super Bowl 2020 future odds were posted at all the major sportsbooks within minutes of NFL Commissioner Roger Goodell handing over the Lombardi Trophy to the jubilant Patriots. Super Bowl 2020 is slated for Feb. 2 in Miami.
Read this article