NBA Playoffs: How Much Does Home Court Advantage Matter

Philosophically, home-court advantage throughout the NBA playoffs is a big deal. Teams scrap and claw to get the best postseason seed possible so that they can play more at home, in front of their own fans, where they are presumably most comfortable.

This logic tracks. Teams play better at home. Not a single squad posted more wins on the road than they did at home during the 2016-17 regular season. It's the same deal across all sports. 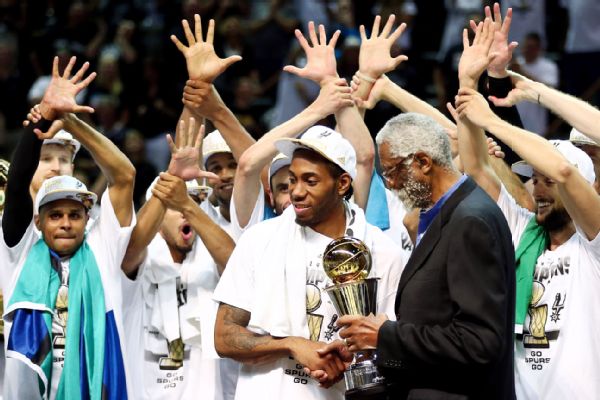 According to WhoWins.com, in fact, teams who host Game 1s at home, meaning they have home-court advantage, go on to win the series more than 67  percent of the time. Two-thirds of all postseason samples.

And let's take it one step further, looking only at teams that win Game 1.

In the NBA specifically, teams that have taken Game 1 go on to win the series almost 77 percent of the time. More than three-quarters of the entire sample.

Some of these teams, of course, might have won Game 1 on the road. So let's narrow it down even further, looking only at teams who hosted Game 1 at home. These squads win those initial tilts 68 percent of the time, and then they go on to win the entire series 85 percent of the time.

That's just absurd. And it highlights the importance playing on your own turf. Setting the tone of a series is important, and you're more likely to do that in a positive fashion while playing on familiar grounds.

Failing that, you just want to make sure the most high-stakes games are played where you are most comfortable—i.e. Game 7s.

And yet, there is a dwindling level of dominance in home-court situations overall. We don't see NBA teams gunning for positioning as much as we did in years past. They are more likely to rest players down the stretch than chase an extra jump. That's what the Cleveland Cavaliers did this year, essentially ceding first place in the Eastern Conference to the Boston Celtics.

On many levels, it's a confidence thing.

The Cavaliers, for example, won't have qualms about playing a potential Game 7 in the Eastern Conference Finals on the Celtics' home court. They are experienced enough not to care. They erased a 3-1 deficit against the Golden State Warriors in last year's NBA Finals, which included winning a decisive Game 7 on the road.

But it's not just the Cavaliers, Warriors and San Antonio Spurs of the world showing a burgeoning disregard for home-court advantage. It's most of the league.

Consider this stat from ESPN.com's Tom Haberstroh: Back in the 1987-88, home teams won nearly 68 percent of all their games. Fast forward to now, roughly 30 years later, and home squads emerge victorious slightly more than 57 percent of the time—an all-time low.

So yes, home-court advantage still matters, and it counts for more when you are in a win-or-go-home situation. But it doesn't carry the cachet it once did. Not in the age of modern-day travel and rest. Players are fresher, regardless of where they are playing. They aren't only getting more time off in between games, but many of them, like those on the Spurs' roster, have been receiving off nights throughout the regular season.

Don't misinterpret this to mean it's meaningless. Again, home teams are dominant in Game 1 throughout history. And after winning Game 1, home teams are 68 percent more likely to win Game 2 as well, per WhoWins.com.

And that 2-0 hole is important, often insurmountable. Road teams who fall behind in a series 2-0 typically win Game 3, when they've moved to their own court, but they end up dropping the best-of-seven series 94 percent of the time.

Keep all this in mind as you're watching the 2017 NBA playoffs unfold. The best teams won't fear playing away from home, on foreign hardhood, in front of enemy fans. But they're not going to enjoy it, either.