Second favorites when the Super Bowl 50 futures odd were first posted back in February, the Green Bay Packers have joined the Seattle Seahawks as co-favorites to claim the 2016 NFL Championship. Apart from some minor questions on defense - we still believe that Green Bay is the cream of the NFL crop this year. Justifying those sentiments, Packers stud QB Aaron Rodgers returns with his vaunted receiver weapons intact and RB Eddie Lacy is entering his third year â€“ a season we feel will be his best yet. Weâ€™re still not sold on the Seahawks appearing in a third straight Super Bowl battle.

With the NFL holding firm on the four-game suspension ofÂ New England QB Tom Brady (Deflategate is now headed to the US court system) the Patriots have dropped into a tie as second Super Bowl 50 chalk. Bolstered byÂ expectations of a monster season by Indianapolis QB Andrew Luck, the Colts have joined the Pats as top chalkÂ to represent the AFC on Super Bowl Sunday. The Dallas Cowboys and Denver Broncos are tied as third third favorites. The Baltimore Ravens and Pittsburgh Steelers round out the top five favorites. Get in on these NFL futures prices by clicking the on theÂ odds image below! 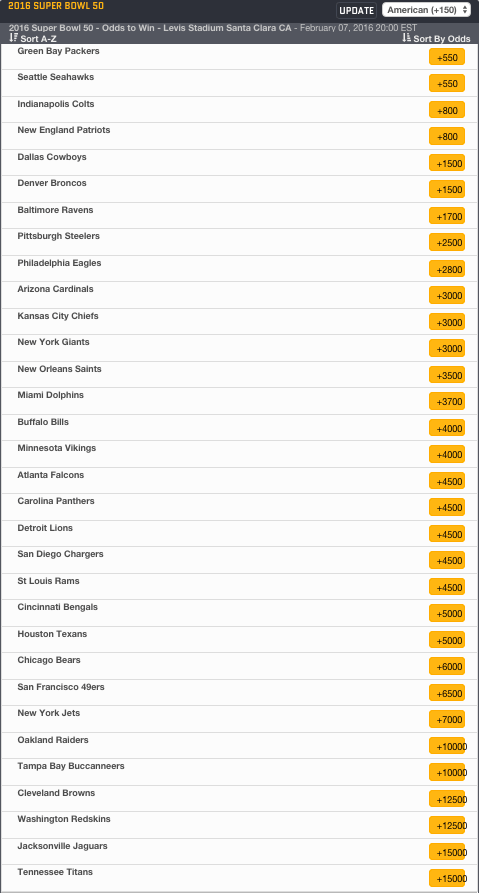 The NFL season will reach it's climax on February 12th 2023 when the Philadelphia Eagles take on the Kansas City Chiefs in the Super Bowl LVII. The two teams with the best regular season records this season will go head-to-head to be crowned world champions for 2022/23, with their superstar players looking to be the man to bring the […]

A wonderful NFL season is finally hitting it's climax as we hit the 57th edition of the Super Bowl LVII when the two teams with the best regular season records go head to head. The Philadelphia Eagles will take on the Kansas City Chiefs as the two best teams in the NFL clash in the biggest […]

A wonderful NFL season has finally reached its climax as the 57th edition of the Super Bowl takes place on Sunday, February 12th at the State Farm Stadium in Arizona. The game will see the Philadelphia Eagles take on the Kansas City Chiefs, as the two teams with the best regular season record meet up in the season […]

The Kentucky Derby trail makes its only visit to Golden Gate Fields on Saturday, February 11 for the El Camino Real Derby! At stake in the nine-furlong Tapeta race are a $100,000 purse, 10-4-3-2-1 Road to the Kentucky Derby points for the top five finishers, and an automatic berth to the Preakness Stakes for the […]