Work on the NFL Championship Gold Mine begins

Buoyed by our successful Super Bowl XLIX futures bets, today we look at the prices posted for the Super Bowl 50 NFL Championship Golden Anniversary game. As was the case last year at this point, the defending NFC and AFC Conference Champions Seattle and New England own top chalk status at the Sportsbook.ag wagering website. Since these prices will change over the next eleven months, if you like any of the favorites, it's best to act now. This is especially true if the chalk squads make gains through free agency, the NFL Draft, or enjoy early success in the 2015 NFL regular season.

Patriots vs Seahawks: Reasons to not expect a Super Bowl XILX Act II

When considering the Seahawks, it should be noted that no team has played in three straight NFL title games since Buffalo's run of four straight loses ended during Super Bowl XXVII on January 30, 1994. Seattle may also lose RB Marshawn "Beast Mode" Lynch to a higher bidder and defensive coordinators have had another year to figure out Russell "Rainbow" Wilson. On the New England side, though they have a lot of young talent, the Patriots also have some aging stars in QB Tom Brady and DT Vince Wilfork who will enter their 16th and 12th seasons respectively. Let's move away from the top chalk.

Super Bowl 50 Futures Prediction: In case you are wondering, the National Football League has dropped the Roman Numeral "L" for the Golden Anniversary game - a wise move. Of the opinion that Green Bay would have had a very legitimate shot at beating New England in SB XLIX, if not for their dreadful collapse in the 2015 NFC Championship game, the Packers are our top Super Bowl 50 pick. We will back Rodgers & Crew with 300 units and add the Indianapolis Colts as our AFC Super Bowl selection with a 200 unit wager on the money line prices posted on the Sportsbook.ag betting board. 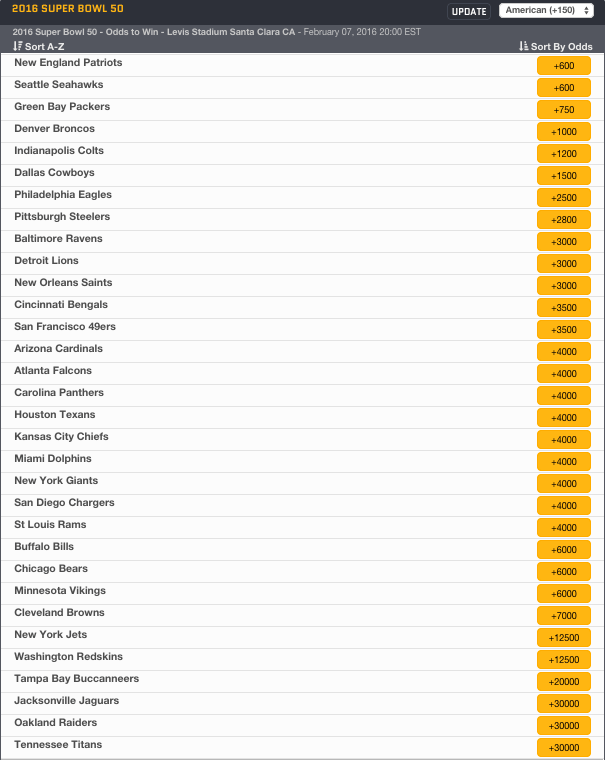