All odds are brought to you by Topbet.

This Eastern Conference Finals matchup between the Boston Celtics and Cleveland Cavaliers is the one everyone wanted.

Or rather, it's the one everyone should have wanted.

Though some believed the Toronto Raptors, who have since been swept by the Cavaliers, and Washington Wizards posed more realistic threats to Cleveland's reign, it's Boston that has always been the team most capable of giving the reigning champ a run for its money.

Yes, the Celtics lost the regular-season series to the Cavaliers 3-1. They were absolutely steamrolled in the final meeting on April 5. Cleveland torched them by 23 points. It doesn't help either that LeBron James and crew enter with the postseason's best offensive rating and fourth-best defensive rating. The question about the Cavaliers was always whether they would play enough defense to scrap by. A balanced version of them is extremely terrifying—especially because even the offensive-first iteration of the Cavaliers stood to blitz through the rest of the East.

Still, there are two things that can, and will, make this series closer than anticipated.

First up: The Celtics' three-point shooting. They are jacking a ton of threes—almost as many as the Houston Rockets did per 100 possessions.

Volume from beyond the arc alone is the best way to beat the Cavaliers. They launch gobs of threes themselves; they're third in three-pointers attempted per 100 possessions for the playoffs, just behind Boston. Even so, those shots account for variance. If the Celtics get hot, they will win games. If they shoot at an average or above-average clip, they'll put themselves in position to win tightly contested competitions down the stretch. 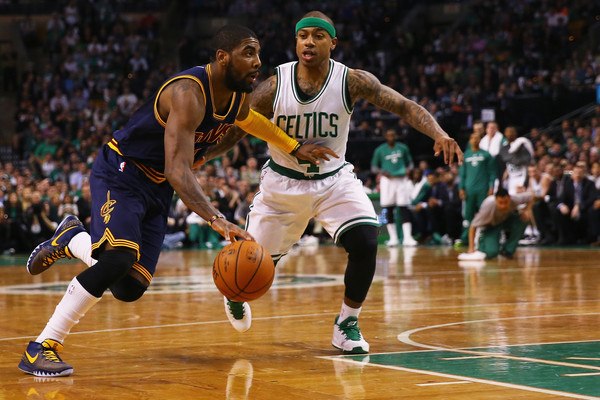 It's definitely concerning that, despite firing more threes per 100 possessions than the Cavaliers, the Celtics don't make as many. But their sample size is larger, and they proved they could outgun the Wizards from long range. They outscored Washington by 105 points from deep over the course of their seven-game series. They went through dry spells and hot streaks. There were peaks and valleys. That always happens when you live and die by the three. But the Celtics have no other choice, as, again, this is their best and only opportunity to battle the Cavaliers' offense.

Second, and equally important, the Celtics can throw more defensive looks at LeBron James than anyone. Jaylen Brown, Marcus Smart, Jae Crowder and Avery Bradley all figure to see time on him. If they want, the Celtics could try covering LeBron one-on-one while attempting to lock down everyone else. What this essentially does is let him eat, while banking on your ability to stymie the other four players on the court. It's not a perfect approach, but trying to beat LeBron is better than trying to upset LeBron-plus-friends.

None of this, unfortunately, changes what feels inevitable. The Celtics' ceiling in this series is six games. They should be able to secure two victories due to exceptional depth and untapped defensive versatility. But the Cavaliers are a well-oiled, fully functioning, wholly engaged playoff machine.

They're not a squad that looks primed to fall to a Celtics team still missing one starry piece.