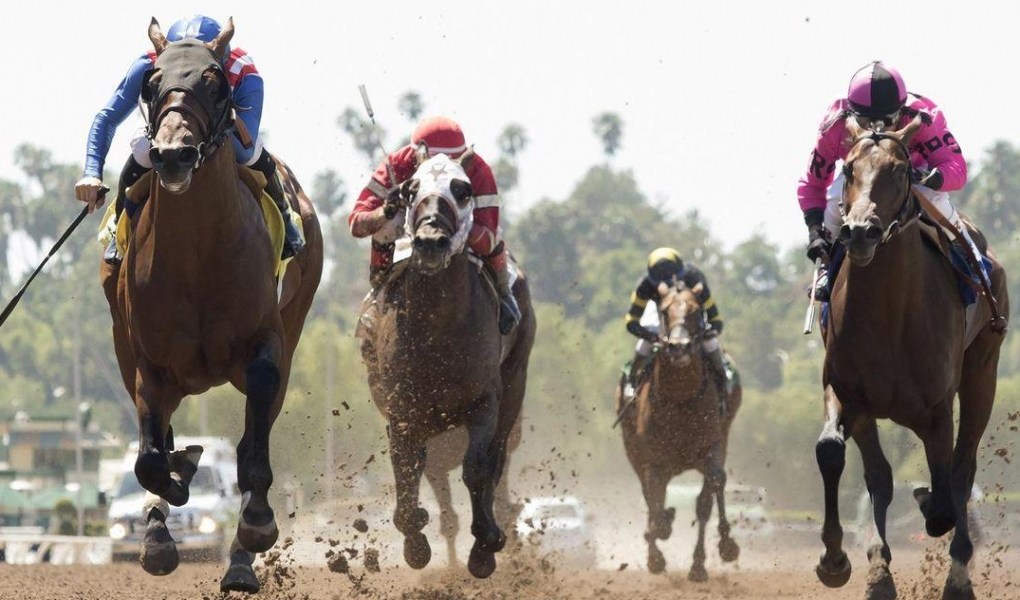 Along with the Jockey Club Gold Cup from Belmont Park in New York, the Awesome Again is one of two races on Saturday that offer an automatic ‘Win And You’re In’ spot in the starting gate for the 2018 BC Classic.

Both races should be on the radar of horseplayers planning to bet the Breeders’ Cup, and both races can be bet at Bovada or another racebook we feature in our sportsbook reviews.

Accelerate Is the One to Beat

A five-year-old Kentucky-bred horse, Accelerate (3-5 in the morning line odds) didn’t get to the races until his three-year-old season, but he has been busy since then, making a total of 20 starts, with 14 of those in graded stakes races.

That list includes two appearences in the Breeders’ Cup Mile and while that may suggest this race is at the upper end of his comfortable distance, it should be noted that he’s coming off two consecutive wins at 1 1/4 miles, so if anything the cut back should be to his advantage.

He’s fast and versatile and loves the track, and he’s a deserving favorite here as well in most Breeders’ Cup Classic future bet pools.

West Coast Just Getting Back to the Track

Meanwhile, West Coast (5-2) is a four-year-old who showed flashes of brillance throughout 2017, including a win in the (G1) Travers Stakes and the (G1) Pennsylvania Derby before running a credible third in the 2017 Breeders’ Cup Classic.

He put a lot of money in the bank running second in the the richest races in the world to start 2018, but he was injured back in March and this will be his first start since then.

Coming off a six-moth layoff, the thinking is West Coast needs to just get this race under his saddle and then hope to turn the tables on Accelerate when they meet in the BC Classic.

Others Are Running for Lesser Awards

Barring some catastrophe, it’s hard to see how this isn’t a two-horse race. Of the others in the field, Prime Attraction (16-1) has seen some good results recently in graded-stakes company running third last out in the (G1) Pacific Classic, albeit 16 lengths back of Accelerate.

At what should be a good price, The Lieutenant (12-1) could get into the picture as well. He was sixth in the Pacific Classic, but prior to that was in the money in three straight graded-stakes including a win in the (G3) All American Stakes at Golden Gate Fields.

Betting the Superfecta at Santa Anita

In a race that doesn’t offer much value in the top two places, the Awesome Again is good place to work on your handicapping skils and play around with an exotic wager like the superfecta. Put the top two at the top of the ticket and try to find the horses you think will be claiming those number three and four spots.