What Are Future Bets 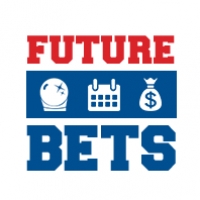 Future bets, much like prop bets, are increasing in popularity among the sports-gambling community. They're far more common than prop bets overall, though. They might be more popular than parlay betting at this point. The intrigue lies in the returns. You are making a decision on a big-picture result that hasn't happened yet. Even the favorite in most cases is considered a long shot. Sportsbooks are, usually, willing to pay out big bucks if your bet hits. [+]

Sounds amazing, right? It is. But it's also hard.

Very rarely is there a sure thing when betting on the big picture. These odds, for the record, are typically limited to win projections, division championships, conference championships and league titles. The more macro you go, the better the return; you won't get as much for picking a division champion as you will a league champion.

There are exceptions to the rule. These exist when a team or two dominates the competitive landscape in its particular league.

The New England Patriots, for example, net you a lucrative return if you bet on them winning the Super Bowl ahead of the next NFL season. They are head and shoulders above the field, and sportsbooks don't want to reward you for investing in prohibitive favorites.

It's the same story in the NBA right now. The Golden State Warriors and Cleveland Cavaliers have met in two straight NBA Finals, winning one championship apiece. Since both are still the talk of the league, you're not going to make a ton of money investing in their conference or championship futures.

Other sports are much more rewarding because the field is wider. The NHL, MLB, college basketball and college football all spring to mind. Even the NFL will offer lucrative returns on legitimate contenders who aren't the Patriots. Ditto for the NBA if you're investing in teams who play outside Oakland and Cleveland.

It's important you understand the nuance and risk involved with futures betting, because it's become an integral part of the sports-gambling world. And luckily for you, we have some tricks of the trade and insight to help keep you informed as you branch out from regular, single-game wagers.

When To Use Future Bets

Future bets are best employed when you feel strongly about a team's chances.


If you believe the Buffalo Sabres of the NHL are going to eclipse 45 victories during the upcoming season and sportsbooks are setting their over/under at 43 wins, then by all means roll with the over.

If you think the Boston Celtics are going to upset the Cleveland Cavaliers and make the NBA Finals, invest in their Eastern Conference Championship futures.

If you believe the Washington Nationals are good enough to win the World Series, check out their championship odds for the forthcoming year.

There are just two things to consider when acting on these strong impulses: First, every bet you make is going to be a long shot. Even if the Celtics have the second-best Eastern Conference odds in the NBA, it's more likely they don't make it to the NBA Finals. Structure the amount of your bet accordingly; don't gamble money you aren't beyond comfortable losing.

Second, and perhaps most importantly, you shouldn't be throwing gobs of cash at overwhelming favorites on the championship front. If the Patriots are a -150 to win the Super Bowl, move past them. You have to bet $150 to win $100, and your goal in any championship-related future bet is to earn more than $1 for every $1 you gamble.

Big-time bettors with deeper pockets are free to dance to the beat of their own drum. But if you're so sure one team is going to win a league championship and no one else has a shot, you're better off avoiding a future play on that outcome altogether than investing money in said favorite.

The best future bets, as we've alluded to, are win projections and championship outcomes.

Win projections are especially intriguing, because it's easier to spot discrepancies in odds. If you study your preferred sport enough you'll know when something is truly off-base.

As an example, should a sportsbook list the over/under on the San Antonio Spurs' regular-season victory total at 50 or less, you know to go over if they didn't lose any key players. If the New England Patriots' preseason over/under is 10 victories and you know Tom Brady will be available from start to finish, you don't even have to think; it's the over all the way.

Oddsmakers are pretty good at setting over/under totals that pave the way for tough decisions. Try targeting teams that have undergone extensive offseason changes but haven't experienced a dip in their over/under totals. Also, try out the same thing on squads that haven't incurred many roster tweaks but have seen a rise or substantial fall from the previous year's projections.

With regard to future bets in general, the earlier you place a wager, the better. That's when the odds for most teams are best, because sportsbooks haven't had time to account for surpassed expectations once the season starts.

If you're working midseason futures, consider waiting for your team of choice to hit a rough patch. Their odds will worsen as a response to their slump, making the potential return on any wager better for you. Of course, you'll only want to do this if you're confident in said team. Slumps are temporary, but if you don't think your pick can overcome a recent injury or protracted slide, you have given yourself the flexibility to pass on your bet.