Using Past Speed Figures in Handicapping 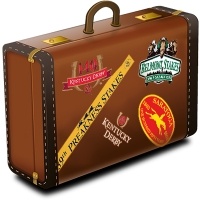 Putting together all the information to handicap a horse race is very much like putting together a puzzle - all the small pieces of information need to be assessed to complete the full picture. While analyzing the expected pace of the race and understanding what form means coming into a race are generally regarded as the two main aspects of handicapping, past performance speed figures are also a piece of the puzzle.

What Do Speed Figures Mean?

Prior to the 1970s, many handicappers developed their own individual formulas for deciding on speed figures - that is, simply a number that indicated how fast a certain horse ran in comparison to other horses in the race, which could then be used to determine the "fastest" horse in the race they were handicapping at the moment.

Since the split times and finishing times in a race are the times for the leader at the splits and the winner at the end, the problem was trying to figure out how fast the rest of the horses ran throughout the race. Typically this involved taking the raw split and finishing times, and based on the idea that that five lengths equaled one second of running time, how many lengths (ie: seconds) a horse made up or lost relative to the leader at various points of the race.

In the early 1970s, a racing columnist for the Washington Post named Andrew Beyer developed a standardized formula for determining speed figures. These figures started to be published in the Daily Racing Form, and thus the Beyer Speed Figure (often just referred to as "the Beyer") was born. The fact is, the formula for determining the Beyer speed figure is fairly complicated. It takes into account not only the split and final times and lengths gained-or-lost equation for every horse in a race, but also track bias. Track bias is the notion that the condition of the racing surface differs from track-to-track, from day-to-day, and even from race-to-race.

Speed figures take this bias into account. For example, you could have two horses run the exact same time at the exact same distance on two different tracks, but the formula would determine that Horse A actually ran faster than Horse B because Horse A was running on a slower track surface. Since Horse A had to overcome this slow-track bias and still arrived at the finish line in the same time as Horse B, he clearly ran faster and would receive a higher speed figure.

One other important note about speed figures is that they are based on the average of the fastest times at the track and the distance. This is why you will often see speed figures above 100, say 103 for example. This indicates that the figure assigned to a certain horse in a race was three points faster than the average.

Since Andy Beyer started to produce his numbers, several other variations of speed figures have been developed, and it's up to handicappers to decide which ones to use. All that being said, it's less important to understand how speed figures are arrived at, and more important to know how to use them as a handicapping tool.

Speed Figures in the Past Performance

Depending on what kind of past performance information you use, the speed figure will be located in a different part of the PP page, but will always be obvious as they are indicated with bold type. In Equibase PPs, the speed figure is the last number before the running line. In the example below, we see the horse Spring Quality had speed ratings of 97-102-103-90 in his four lifetime races:

Conversely, if a horse is stepping up in class, from allowance races or lower-level stakes, and it has top speed figures in the high 70s, it's going to have trouble keeping up with horses that have been consistently running in the low-to-mid 90s. Although not unheard of, it is very difficult for a horse to increase its speed by 20 or so points from one race to the next.

Outside of this kind of class movement, what you like to see from a handicapping point of view is horses that are consistently increasing their speed from one race to the next, and then once they hit their plateau, they are able to consistently maintain roughly the same speed figure.

The first point indicates a horse that is improving and is often a very good bet, particularly if it is entered in a race against horses that aren't showing the same type of gradual improvement, speed-wise. The second point illustrates a horse that is, again, consistent. You can bet that horse with some confidence it will run the same race as it did in its last start, and the one before that, and the one before that. These are some of the easiest horses to handicap, because what you see is what you get.

As mentioned above, it is difficult for a horse to suddenly take a big jump in speed from one race to the next, and in fact, this would be a horse to be wary of when making a bet. If you see a horse that has been running 67-65-69, for example, and suddenly pops off an 85, that should be considered an anomaly, until the horse can do it again. There could be other factors that helped the horse gain such a big number - it could have caught the perfect trip along the rail, for example, on a day when the track down on the rail was particularly fast. These types of horses will often "bounce" - that is, run quite a bit slower in their next race - and should be bet cautiously, if at all.

One other aspect to note about speed figures is that when you are handicapping top-level graded-stakes horses, they tend to lose their importance. If you have a race where almost all of the horses are consistently running in the high 90s to low 100s, those horses are very evenly matched, speed wise, and other handicapping angles need to come into play.

We started off this page by stating that speed figures are pieces of the handicapping puzzle, and so we'll end by stressing that point once again. It's often observed that inexperienced handicappers put too much emphasis on speed figures, because they are simple to understand, and ignore important factors to handicapping a race such as class, form and pace.