The Meaning of Class in Race Handicapping 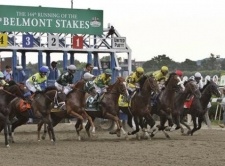 Quite often you will hear professional horse handicappers and racing analysts refer to certain horses as "dropping down" or "stepping up" in class from their previous race or races. Understanding what this means and identifying these horses when you're going through the past performance information and making your picks is an important aspect of trying to separate contenders from pretenders at the race track.

If you just compare the raw numbers between two horses entered in a race, you might think that Horse A, which has won three consecutive races, is much better than Horse B, which has finished third three consecutive times. But taking class into the equation can paint a whole different picture.

When people around the track refer to a certain horse's "class" they're basically talking about the level of competition the horse has been facing. In simple terms, horse races in North America can be divided into four different groups - maiden races, claiming races, allowance races and stakes races - and there are also multiple levels of class within these groups.

Maiden Races - These are races for horses that have yet to win a race. Most horses will begin running in what are called Maiden Special Weight (MSW) races, which offer bigger purses and from which a horse cannot be claimed. If after one or more tries at this level without a win, horses will next run in Maiden Claiming races, with typically smaller purses and from which the horse can be claimed by another owner/trainer. From MSW to maiden claiming is a drop down in class.

Claiming Races - These are the most common types of races in North America. Depending on the track, claiming prices can range from a couple thousand to tens of thousands of dollars. Often in these races trainers have an option of entering the horse for a slightly lower claiming amount than is set by the track's racing secretary for the race, in which case they get a slight reduction in the weight they have to carry. Generally, the class level is determined by the claiming price, so a horse going from a $10,000 claiming race to a $25,000 claiming race is stepping up in class - going in the other direction they would be dropping down.

Allowance Races - Once a horse has won a race, it will typically run in allowance races (although horses do sometimes go straight from MSW races into stakes races). For new horseplayers, allowance races can be the most confusing due the variety of conditions in the race. Besides whether the race is restricted to state-bred horses, restricted by age, or so-called "starter allowance" races which carry restrictions specific to each track, the most important aspect is the number of races the horse has (or more accurately has not) won.

In the past preformance, this is indicated by something like: NW2/X - meaning "non-winners of two races except maiden or claiming" sometimes with the additional qualification of a dollar (total purse) amount of money in those races.

As mentioned, this can seem a bit confusing for the newbie. For our purposes, the most important aspect is that "non-winners of" info. A horse going from NW1 to NW2 (or NW2 to NW3) is stepping up in class - going the other way, they are dropping down.

Stakes Races - In many ways, stakes races are the easiest to determine in terms of class level. For one thing, the top level of stakes races are "graded stakes" and so going from Grade 3 to Grade 2 to Grade 1 stakes is an obvious move up in class. Below this are handicap stakes (although these can also sometimes be graded), "black-type" or "listed" stakes, or stakes that are restricted to state-bred horses or female horses. Going from any of these types of stakes into open graded-stakes is a step up, going the other way is a step down.

Now we'll look at how you figure this all out when looking at the past performance information for a specific race.

The first thing you need to do when looking at the past performance information is to determine the conditions, or class, of the race you are handicapping. This information is found at the very top of each race page. In the example above from the first race at Belmont Park, we see that this is an allowance race for horses ages three and above, with a purse of $90,000 (plus an additional bonus if the winner is a state-bred horse ie; bred in New York state).

We also see that the horses have never won a race worth $10,000 or more other than (except) maiden, claiming, starter or state-bred allowance, or never won two races. In the past performance info, this race would be described as Alw 90000NW2$/x.

Determining Class in the Past Performance

Once you have determined the class of the race, you then need to look at the horse's past performance, to determine if this race is a step up or drop down in class. Or if the horse is running at basically the same level as in its previous few races.

The #2 horse in this race Hammerin Aamer, provides a very clear example of class movement for a horse relatively early in its career.

This horse ran three times at the MSW level, each time for a slightly lower purse amount. Unable to win - or even get in the money - in these races the trainer dropped him down to a $40,000 (with a $35,000 option) maiden claiming race - a smart move, given that he won the race. They then moved him up to the allowance level, specfically a restricted starter allowance race, with a purse of $50,000, for NW1/X - non-winners of 1 race, except maiden etc., which he also won.

Today, as we determined earlier, he's entered to run in a non-restricted allowance race, for a bigger purse, and against NW2/X. This is a step up in class from his previous two races, a fact that needs to be considered in handicapping the race. Evidently it proved a factor with the betting public, and as it turned out his odds drifted up from the morning line of 6-1 to just over 9-1 when the gates opened. He did run second in the race, and so bettors who decided he could handle the jump and used him in the Place spot on their tickets were rewarded.

It should be noted that there were a few other factors that pointed to this horse getting a good result in this race - the fact that his "speed figures"were improving with each race, and perhaps more significantly, he started to win once he was stretched out from six furlong to 1 mile races - but we'll cover those aspects in other articles.

We'll take one other example from this race to demonstrate a horse trying to get a win by dropping in class.

The #6 horse, Wild About Deb, started off very well in his career, winning at the $56,000 MSW level in just his second lifetime race. Encouraged by that result, his connections decided to take him right into stakes racing, where he ran five times, four of those in graded stakes and one listed stake, the Ohio Derby.

Unable to win at the stakes level, and after taking the winter off, he was brought back and dropped way down in class, from the Grade 3 Discovery Stakes, to a $67,000 allowance race for NW1/X. Where he finished fourth.

They then entered him in this race. Having not been able to even crack the top three at $67,000 Alw against non-winners of 1, what chance did he have at $90,000 Alw against non-winners of 2? Not much, you might think, and you'd be right. From our perspective, this horse was an obvious toss in this race, and ultimately he finished 8th at odds of 9-2, way down from the ML odds of 12-1, and way over bet simply based on the fact he had been a graded-stakes runner.

Understanding where a horse fits in terms of class will help you avoid making the mistake of betting horses like Wild About Deb.