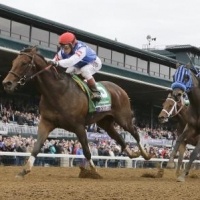 A flat out, go-for-broke duel run at six furlongs on the dirt course, the Breeders' Cup Sprint is open to horses three years and older, and offers a total purse of $1.5 million. One of the races on the original Breeders' Cup card back in 1984, the Sprint is typically run early on Day Two of the Breeders' Cup World Championships weekend, and for 2017 the race will go on November 4.

Whether you decide to go with a longshot or a favorite as your Breeders' Cup Sprint pick, you can enjoy win-or-lose cash back bonuses and other promotions when you have a wagering account with one of these reputable online racebooks.

In the last five BC Sprint races, four times the winner has either been in the lead or within one length of the lead 1/4 mile into the race, and four times the opening quarter mile has been run in under 22 seconds, which is very fast. In the other case, the eventual winner was only 2 lengths off the lead at the quarter-mile marker, and the time was a flat 22 seconds.

This is a situation where understanding past performance information comes in very handy.

If you look at the running lines for a horse's previous races, it indicates where the horse was at various stages of the race, and either how far ahead it was, or how far behind the leader it was at certain points in the race. When it comes to betting the BC Sprint, horses that get out of the gate and consistently challenge for the lead early in their races should get strong consideration. The PPs also indicates the split times during the races, and so it's fairly easy to compare how "fast" horses are in relation to each other.

It's also crucial to understand a bit about track bias, and how that plays into racing times. Some race track surfaces are simply faster than others, with the "hardness" of the surface and the actual compositon of the dirt playing a big part.

Some tracks, such as Santa Anita or Remington Park are notoriously "fast", while others such as Saratoga or Keeneland are considered "slow". So when comparing racing times, it's important to keep in mind the surface conditions of the track where the races are held.

Fortunately for the less-experienced handicapper, speed figures in the past performance are helpful in this regard, as they are calculated by factoring in track bias. This is why you might see a horse assigned a speed figure for a race that is higher than another horse in another race where the winning time was actually faster.

This is a very important factor to consider when betting the Breeders' Cup Sprint.

Looking at the payouts on the BC Sprint over the past few years, it has been a race that has historically offered some good betting value, with the average odds payout on the winner around 10-1.

Over the past 10 years, only three favorites have won the race, and three times the winner was in double-digit odds, setting up a situation that many veteran horse handicappers like, in that you can reasonably play a longshot in combination with a favorite on exacta tickets and have a decent chance of winning.

Over the past five versions of the race, the $2 exacta has paid out an average of just under $120, which is as good a return on investment as you can hope for at the track.