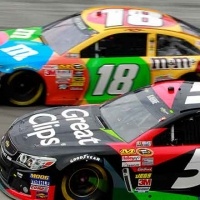 There may be no more passionate fan in all of spectator sports than those who support NASCAR. The infield crowd at a NASCAR race has been described as a cross-section between Woodstock and Mad Max. These fans pick their favorite, and their least favorite driver, and they stick with those choices religiously through thick or thin. Belying its down-home roots, NASCAR has always been a sport on the cutting edge of technology and was the first major sport to embrace social media as a major marketing tool.

NASCAR fantasy leagues are a combination of NFL fantasy and PGA Tour fantasy leagues. Like the NFL, there’s only one event per week, so the strategy comes down to building up toward the showdown day. But unlike the NFL, the NASCAR season is much like the PGA Tour – a long, grinding, drawn out 36-week battle for supremacy.

And as with fantasy golf, a NASCAR fantasy player isn’t stuck with a losing lineup for long. You get to pick a new team of drivers for each race, so there’s no reason to feel glum for long. In NASCAR fantasy, hope springs eternal.

NASCAR fans tend to be ruled by their hearts. Their association with their favorite driver can border on the passion of the relationship they share with family members, and that can be problematic when it comes to playing fantasy NASCAR.

To succeed in fantasy sports, you must allow your head to rule, not your heart. So if that means pulling for your least favorite driver to win, then so be it.

Round and round they go, and when they stop, if you can figure who the winner will be, then you can also be a winner at fantasy NASCAR.

How To Play Fantasy Nascar

In a standard NASCAR fantasy game, you'll be asked to select a team of drivers, usually five per race, from the roster of race entries each week.

Each driver is assessed a monetary value and your team total may not exceed a total pre-established amount. For example, in NASCAR Fantasy Live, the official NASCAR fantasy game of NASCAR.com, you must select five drivers and the total valuation is limited to $100.

This prevents you from loading up with top contenders on your team, because you'll be required to take a couple of flyers on longshots to win the race just to balance your bottom line.

At the end of the race, you add up the total finishing position of those drivers and the team with the lowest combined number is the winner that week, with overall points being tabulated to determine a season champion. But the beauty of it all is if your team hits the wall that week - either literally or figuratively - you get to start from scratch with a completely new lineup the following week.

If you are considering an entry into a NASCAR Fantasy League, being aware of the rules prior to getting on board is vital. Is it a one-off league where you change your roster every week, or is it a keeper league? Do you draft drivers, or are they selected via an auction format?

Are there restrictions on how often you may used a driver during a specific season? Are you permitted to trade drivers with other members of the league? Is is a straight up scoring system based on final finishing position in the race, or are bonus points awarded for such items as leading a lap or winning pole position?

It's important to know all of these answers before you join a NASCAR Fantasy League.

Other Types Of Nascar Fantasy Games

NASCAR.com, through its website http://fantasygames.nascar.com, offers Streak To The Finish, a unique style of NASCAR Fantasy. To play, you pick one driver to finish in the top 10 each race week.

As long as your selected driver finishes in the top 10 in consecutive races, your streak remains active and you accumulate points. Once your streak ends, you start anew. You many only use a driver once during any active streak.

You may play this game in any of the three NASCAR series - The Monster Energy NASCAR Cup Series, the Xfinity Series, or the Camping World Truck Series. But you are only allowed to use the same driver once during any active streak.