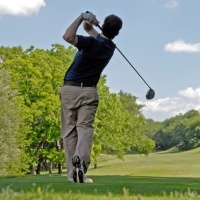 Golf is big business. Golf Magazine recently estimated that the average golfer spends approximately $3,000 on their game each season. Corporate sponsorship of golf totalled $1.73 billion as recently as 2015. That’s a lot of dough being dished out on the links and when a sport is that popular – golf has its own 24-hour channel on television after all – is there any wonder that fantasy golf leagues would develop?

In fantasy golf, you draft a team of golfers each week – usually six per team – and you score points based on their rounds in the tournaments. Pars, birdies, eagles, double eagles and aces are worth positive points toward your score, while as with a real game of golf, bogeys, double bogeys and triple bogeys harm your overall total by negating points from your score.

When it comes to succeeding at fantasy golf, it’s no different than any other fantasy sport. You need to do your homework and you need to know the players. Top golfers will generally pick and choose the tournaments they opt to play on the PGA Tour, so you’ll want to know who is entered in the field before you set your lineup.

Just as in horse racing there are horses for courses, there are golfers for links. Some courses are more wide open and set up better for long hitters off the tee, while other courses, especially those utilized for majors, reward the accurate players who have steady short games.

An easy way to figure out which golfers are prime candidates to succeed at the next course on the Tour schedule is to check the odds being offered on the golfers in that tournament at online sportsbooks like Bovada.lv, BetOnline.ag, SportsBetting.ag and TopBet.eu. Their oddsmakers get paid to know their stuff, so that’s a good starting point when setting your weekly lineup.

How To Play Fantasy Golf

Fantasy golf tends to operate in very similar fashion to fantasy football. There is one game each week based on that week’s PGA Tour stop. You draft a team of golfers and compete against other teams.

You can also accumulate points via streaks of birdies, all rounds below 70, and final finishing position. The objective is simple – score more points than all the other teams and you win that week’s fantasy tournament.

One of the best parts of fantasy golf is that if you draft a lousy team, it will only haunt your dreams for four rounds of golf. You select your team, they play that week’s tournament and whether you win it all or finish well off the pace, you start anew with a different squad every week.

This is unique from other fantasy sports, where you must suffer for your draft-day mistakes for an entire season before getting a chance at a do over, with only waivers and trades available to fix your problems in the meantime.

Another difference from fantasy football, is that instead of competing against one team each week, just like actual golf, it’s every man for himself as you battle for supremacy against all the other teams entered in that week’s competition.

A drawback to fantasy golf is the length of the tournament season. The PGA Tour runs 47 weeks of the year, making in one of the longest campaigns on the annual sporting calendar.

Other Types Of Fantasy Golf

Some fantasy golf leagues like the ones offered by DraftKings and FanDuel operate with a salary cap, say $50,000. Each golfer is assigned a dollar value, and your six players must not add up to more than $50,000.

There are also money leagues where you pay an entry fee with your team list and are eligible for cash prizes.

Pick ’em leagues offer a different style of team selection, where golfers are placed into six different tiers and you must choose one golfer for your team from each of the tiers.

Where To Play Fantasy Golf

The popularity of fantasy golf is evidenced by the number of leagues that are set up and available for you to join. Both DraftKings and FanDuel offer dozens of leagues and you may enter as many as you wish.

Yahoo! has its own Fantasy Golf League, as does the Golf Channel and even the PGA Tour offers its own official fantasy pick ’em golf league that is free to join. You pick any four players in that week’s tournament field, but you can only use the same player 10 times during an entire season.