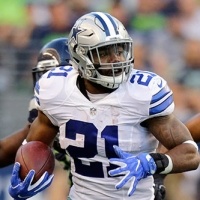 There’s more to the National Football League season than 16 action-packed weeks of grid iron entertainment. Sure, that’s enough to satisfy the average football fan, but what about the bettors looking to cash in on highly anticipated weekly matchups? For many traditional bettors, online and Las Vegas sportsbooks will always be the No. 1 way for sports wagering. [+]

Placing your bets on moneyline, point spread, over/under and even prop wagers can certainly pay off handsomely in the long run. But fantasy sports wagering is slowly gaining respect, even with those traditional bettors.

The first thing you’ll find out when embarking on your fantasy football betting journey, is that there’s much more research involved than betting with traditional sportsbooks.

Everything from the draft, to how the waiver wire works to setting lineups on a daily or weekly basis can be enough to scare you away from even attempting to try fantasy sports betting.

There are two fantasy sports betting giants — DraftKings and FanDuel — that help make that transition much easier, especially for newcomers.

Whether you’re looking for a one-day league with quick payouts or a season-long commitment that requires a little more time and effort, both DraftKings and FanDuel have you covered.

Once you’re signed in and ready to start your fantasy sports betting journey, the real work begins. The first order of business should be preparing for your draft.

Many fantasy sports sites offer customers mock draft options. Sign up for a trial draft to get accustomed to how it works and get a sense of which player will fall to you in each round.

If you’re one of the top five selections in your pool, the options are endless. However your drafting strategy will change drastically based on whether you’re playing in a standard league or if it’s points per reception, in which you gain points for yardage. That makes a huge difference, especially when taking rushers who can catch the ball out of the backfield — Ezekiel Elliott of the Dallas Cowboys, for example.

Much like in real life, it’s hard to win in any fantasy football league without a true No. 1 quarterback. There’s a handful of legitimate QBs to choose from, but maybe none better than Green Bay Packers pivot Aaron Rodgers, who tossed for more than 4,400 passing yards in 2016.

If you’re focused on a wide receiver, look no further than Pittsburgh Steelers star Antonio Brown, who in 2015 racked up 1,834 yards. Atlanta Falcons star Julio Jones , who finished second in receiving yards in 2016, is another option at wide receiver.

Selecting the right guys in the draft is just the first step in having a successful fantasy football team. Keeping track of trends such as hot streaks and which players have been added the most throughout the year will be helpful in the long run.

Many online fantasy sports sites provide bettors with the right tools to succeed. It’s up to you to use them wisely.

The injury big is almost impossible to avoid and it will surely catch up to your team one way or another. Leagues will vary in the amount of injured reserve spots each roster can carry, but they should be taken advantage of nonetheless.

If your star running back goes down with a long-term knee injury, it’s crucial to place him on one of your IR spots and pick up another player from the waiver wire. Not just the highest ranked player, though. Narrow your search down to how each player has performed over a seven or even 14-day stretch and take advantage of their hot streak. It may be enough to vault you to the top of the standings.

Fantasy football leagues are typically head-to-head format against a different opponents each week.