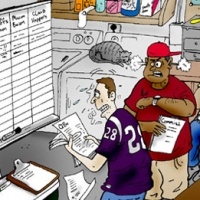 Estimates are that more than 32 million people in North America are involved in some sort of fantasy sports. But no matter what type of fantasy sports you opt to play, it all starts the same way – by selecting your squad. Draft day is the most important day of the fantasy sports season, especially if you are in a keeper league where you are allowed to maintain players from season to season. Make the wrong picks, show up unprepared, or opt not to take the process seriously and you might as well have just thrown your entry fee into the fireplace.

The fantasy draft process tends to be similar whatever the sport is that you might be involved with. If it is an ongoing league, you draft in reverse order to the previous season’s finish, the same draft format employed by actual professional leagues. Expansion teams generally are awarded the first picks, while some keeper leagues will allow a new franchise to choose the number of keeper players allowed from the pool of unprotected players prior to the start of a draft.

Other leagues will select in alternating order, often referred to as a snake draft. The team that goes last overall in round one would get the first pick in round two.

When it comes to selecting your team for your fantasy league on draft day, you should know the rules of your league like the back of your hand long before you get to the draft table, especially if it is your first year in the league.

Can you trade players? Is there any limit on the number of waiver claims you can make during a season? Is a salary cap involved? Most importantly, know the rules of scoring for your league to determine which players are going to be the most valuable to your team on game day. And be right up to date on the latest injury reports.

On draft day, don't take early flyers on longshot players or volatile performers. Real teams don't do that when they draft and neither should fantasy players, because it will only come back to bite you.

If you are in a PGA Tour or NASCAR fantasy league where you choose a different team every week, or a daily fantasy sports game such as DraftKings or FanDuel, your research will involve which players have a history of success at the upcoming venue or against that day's opponent, and you'll also want to be aware of which athletes are on a hot streak.

When selecting your fantasy football team on draft day, know your league's rules and be aware of how many teams there are in the league. You'll want to get a running back early, because the number of elite running backs in the NFL dwindles every season.

If there's more than 15 teams in your league, you won't want to wait long to grab a quarterback, because the number of top QBs today is also limited. There are plenty of top receivers and kickers are a dime a dozen.

Go with proven performers in the early rounds. Save the gambles for later and go with solid early selections.

Select a good mix of power hitters and spray hitters for your lineup, because when the long ball hitters go through a dry spell, the steady average hitters will keep you afloat. Likewise, mix your pitching staff with starters and closers.

Avoid platoon players, or players that hit lower in the order because they won't get to the plate as frequently.

When selecting your NBA fantasy team, it's best to start off thinking big. Dominant centers and power forwards are vital to an NBA team's success and they will also make or break your season. These players tend to play extensive minutes and spend their nights around the basket at both ends of the court, so they will be rolling up the points for you.

Guards are important, too, but in comparison to the best big men, they are plentiful.

Defense wins championships and it also wins for your in fantasy NHL, albeit in a different manner. Defensemen in the NHL capable of putting up big offensive totals are minimal, so if you can grab an Erik Karlsson or a Brent Burns with your first pick, that is a mandatory selection.

You can get a 60 or 70-point forward in the later rounds but you won't get a 60-point defenseman beyond the first round. And if your league takes into account stats beyond goals and assists, look for all-around players who collect points, play physically and take penalties.

Also, try to get a goalie in the first three rounds to ensure that you have a netminder who is going to play between 60-70 games in a season.