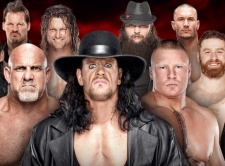 For those who live or die with the outcome of a WWE card, we'd advise you to leave the room right now, because we're about to break your heart. Spoiler alert - pro wrestling is fake. The winners and losers are determined in a boardroom long before the bout, and every match is scripted and choreographed from start to finish.

Why bet on WWE?

Where to bet on WWE?

This leads to quite the paradox. Match-fixing scandals, while rare, have reared their ugly head in the sports world, when bettors sought to massage the outcome of a game by paying off some of the players. Yet in pro wrestling, people wager on the bouts, even though everyone knows beforehand that it is fixed, that both competitors have signed contracts pre-determining the outcome of the match. And there are still many willing to put real money on this pretend competition.

Why, you might ask, and it is certainly a legitimate query. Well, here's why - because the outcomes of these matches are known only to a few and are guarded more securely than the gold reserves in Fort Knox. And the fact of the matter is that if you are an avid follower of WWE, then there's money to be made by wagering on their product.

What are the best WWE betting odds?

The WWE holds some 500 cards per year and is watched in more than 150 countries. The entity's largest events, like the Royal Rumble, Survivor Series and the mecca of wrestling, Wrestlemania, are as big a day to the WWE's loyal following as the Super Bowl is to a football junkie. Pro wrestling is often described as soap operas for men, but it's these men who are regularly glued to the set watching this soap opera unfold who stand the best chance to make money betting on the WWE's major events.

The WWE is all about the storylines, a steady progression of twists and turns leading up to the denouement at Wrestlemania. If you've been following along and paying attention, then you are more likely to be able to make the most educated speculation as to how this is all going to play out. And if you think the oddsmakers at the big sportsbooks are as riveted by the weekly episode of Smackdown as you are, well, we've got a surprise for you. They aren't. And that's why your chances of cashing in are strong.

You know how crazy it gets. You know to expect the unexpected, and that's a huge advantage when placing bets on WWE. Most of all, you know which characters the script writers are building toward stardom, and which are on their way out of the big picture as a main event performer.

How to make better WWE bets?

Since the outcome is predetermined and known to a select few, sportsbooks are guarded in setting strict limits on how much you can wager and what amounts you can win on WWE matches. It only makes sense. They don't know if that fellow peeling off the big wad of cash is in fact the guy who wrote the script for the match on which he's about to place a wager.

While that might make it seem foolhardy or pointless to put money down on an event that on the surface is not a legitimate sporting competition, we're here to tell you to stop thinking like that, and start thinking like a savvy wrestling fan. If you've paid attention to the goings on and more significantly, to the comings and goings of wrestlers, it can suddenly open up your eyes to some obvious wagers that are there and designed to put money in your bank account.

Maybe a wrestler is leaving for Hollywood to make a motion picture and won't be available to enter the ring for a few months. Do you think they are going to let him win the big match and then take a sabbatical. Or perhaps WWE founder Vince McMahon just shelled out big bucks to a former UFC star that they want to build their next major storyline around. Expect that grappler to come out on top.

Sportsbooks have dozens of sports they must be constantly studying in order to set odds. Do you really suspect that the tops oddsmakers are devoting a significant part of each day preparing to establishing the odds on WWE competitions? That's why it's possible a good bet can slip through the cracks, and if you know your stuff, the chance to cash in on an underdog is there for the taking.

Best of all, with the WWE, the outcomes are cut and dried. There's a clear winner and a sure loser and generally, it all unfolds in a matter of minutes. And that's when you'll know which side of the outcome you are on as well.