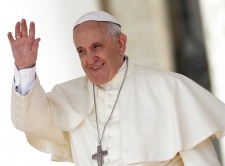 Pope Francis recently told the world that there was no Hell, and who would have ever bet on a sitting Roman Catholic Pope making such a bold statement? Well, you couldn't wager on that revelation at your favorite sportsbook, but when Pope Francis was elected, you most certainly could have put some money down on that outcome, and it would have paid off quite handsomely. Every major sportsbook offers a future book on who will be the next Pope.

Why bet on religion?

Where to bet on religion?

Bookmakers handled several million dollars in wagers on the 2013 Papal election and when the wagering first began to heat up, Pope Francis - real name Jorge Mario Bergoglio - wasn't even listed as one of the top contenders. Archbishop of Milan Cardinal Angelo Scola and Cardinals Peter Turkson of Ghana, Canadian Marc Ouellet and Vatican Secretary of State Tarcisio Bertone were considered the top contenders, with Turkson the betting favorite at +300.

You could have got +2500 on the future Pope Francis, which would have left you with a healthy offering to put in the plate the next time you were in church.

What are the best religion betting odds?

It may be years until the next Papal Conclave gathers to elect a new Pope, but you don't have to wait that long to put your money on the Cardinal you are certain will be the next anointed to the Papacy. Virtually every major sportsbook offers ongoing future book wagering on the outcome of the next Papal election, although it's difficult to say who you should put your money on to emerge victorious.

But that's the inate beauty of Papal wagering. Many different players are in with a chance and since there's no public polling of the maximum allowable 120 Cardinals assigned with the task of picking the next Pope, there really isn't any insider trading going on that might give you a leg up on the outcome. But that doesn't stop the oddsmakers from trying. The Irish bookmaker Paddy Power had staff on the ground in Vatican City during the last two Papal elections seeking to gather as much intel as they could.

Still, it really is a crapshoot when seeking to determine who to put you Pope bets down on, although if you forecast correctly, you can count on a healthy payout. The future Pope Benedict XVI paid out at odds of +300 in what was the first Papal election to be offered for wagering purpises by online sportsbooks.

Beyound determining the next Pope, some online sportsbooks offer wagers on what name the new Pope will choose, and by the way, Francis wasn't even on the board in 2013. You can also wager on the country of origin of the new Pope, and that's been a contentious wager in the recent elections. Turkson would have proven to be the first black Pope, while if either he or Ouellet had emerged victorious, they would have proven to be the first Pope from outside Europe.

How to make better religion bets?

Online bookmakers handled multi millions in wagering on each of the last two Papal elections, but it's not like betting on the outcome of a Papal Conclave is a new thing. Putting money down on who will be the next resident of St. Peter's Basilica has been part of the reality of the Papacy almost since they first started electing Popes. There are references about betting on the outcome of the Papal conclave going back as far as 1503, but even that writing suggesting that such wagering was an age old practice.

Later in the 16th century, weary of these so-called holy rollers, Pope Gregory was reported to have threatened anyone caught speculating on the Papal race with excommunication from the Roman Catholic church. But that didn't stop the betting. It continued unabated and in 1903, there was actually a lottery sponsored by the Italian government in which you were asked to predict the time and date at which Pope Leo XIII would take his final breath.

One of the best aspects of Papal wagering is that in combination what are normally healthy odds on offer, sportsbooks generally will allow large wagers on bets on the next Pope, since it's always such a wide-open race. Some online sportsbooks will accept wagers between $10-25,000. That in part explains why more than 20,000 people laid down bets on the 2013 Pope race. In excess of $200,000 was wagered with 48 hours of Pope Benedict XVI announcing his resignation.

Due to the paucity of available information, there tends to be plenty of volatility in the Papal wagering markets, because the reality is that no one knows for sure what the outcome will be.