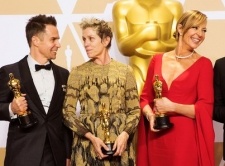 Why bet on Academy Awards?

Where to bet on Academy Awards?

You will find that wagering on the Academy Awards is a popular category with bettors and is on offer at all of the major online sportsbooks. Some sportsbooks will simplify the choices and stick to only the most popular categories - best picture, best actor and actress, best supporting actor and actress and best director - but others, especially sites that specialize in prop betting, will go much deeper down the list in their Oscar offers, posting odds on categories such as best foreign film, best documentary and top original screenplay.

Some sportsbook sites will list future book odds on the Oscars long before the nominations are announced. It's certainly a roll of the dice to make a wager on a category at this juncture, because there's no guarantee the film or actor will be nominated in their category, but the odds will be much greater at that stage of the game and the gamble can pay off handsomely for you in the long run.

A little bit of knowledge can go a long way here. Know your movies, and more significantly know the traditions of the Screen Actors Guild, which picks the nominees and the winners, and you can get ahead of the game. Hollywood tends to love message movies and movies about the human condition, such as 2018 Best Picture winner The Shape of Water. They also tend to go for actors that are reaching deep into the recesses of their psyche to portray characters. Or Meryl Streep. Whichever one they see first.

What are the best Academy Awards betting odds?

As the day of reckoning draws closer, the focus tends to narrow on a couple of candidates in each category and this will dramatically impact the odds, so if you are planning to wager on a specific Oscar bet, you'll want to get your wager down early in case the odds plummet at a later date.

As with any wagering, those who pay attention to trends and to the goings on within the industry are going to have the best luck when placing bets on events such as the Academy Awards. Hollywood is an industry that is big on symbolic gestures and loves to embrace the latest cause celebre, so it's always a good idea to follow which way the wind is blowing within Tinseltown.

While areas such as common opponents, home and away records and back to back games can play significant roles in how you wager on a sporting event, there are also clues that can lead you down the winning path where the Oscar race is concerned. There are several award shows held prior to the Oscars, and generally, a pattern will develop within these ceremonies that might tip you off on where to put your money down when it comes to the Academy Awards.

These include the British Academy of Film and Television Awards (the BAFTAs), the Golden Globes and the Screen Actors Guild Awards. Track where the hardware is being handed out at these events and if a consistent pattern develops, then that's likely the course you should chart with your Oscar wagering.

The 2018 Academy Awards followed the form charts almost to perfection. Favorites ran away with virtually every major category. That isn't always the case with the Oscars, and there have been some shocking upsets over the years, most notably the best supporting actress win by Marisa Tomei in 1993 for her role in the film My Cousin Vinny.

When it comes to wagering on the Oscars, there are numerous categories on which you can place bets, so that is enticing because there's even more chances to win. Some sportsbooks will only offer wagering on major categories, while others will dig deep and post odds on categories like best cinematography and best animated feature. Regardless, you will find that Academy Awards wagering usually falls into one of four categories.

Future betting is sometimes listed by online sportsbooks even prior to the unveiling of the official Oscar nominations. While this can certainly be a risky proposition, because you can't say with 100 percent certainty that the movie you put your money on will be nominated, but on the other hand, this is the point at which you are most likely to be offered the greatest odds on that film, and therefore it's the chance to generate the largest amount of potential return on your stake.

Outright winner wagering will be offered once the day of reckoning arrives and the nominees for that particular years' Academy Awards are revealed to the general public. The odds likely won't be as good as in the future betting portion of wagering opportunities, but at least you know your bet will be in play right up until the moment the envelope is opened and the winner revealed.

Every year, certain films are more popular than others and end up with nominations in a variety categories. In these cases, there are sportsbooks that will offer over/under wagering on the amount of awards that film is likely to capture on Oscar night. A set total will be established and you will be tasked with determining whether the awards doled out to a particular film will go over or under that number.

Proposition bets, or prop bets as they are better known, are posted by some sportsbooks and can offer odds in a variety of areas to do with the actual Academy Awards show. It can cover anything from the color or brand of dress worn by one of the Oscar nominees, which celebrity might take a selfie with their Oscar and over/under wagering on the length of the broadcast. The beauty of prop bets is that they are often like Forrest Gump's box of chocolates. You never know what you're going to get.