Where Do Patriots Stand Among The Greatest Sports Dynasties?

The New England Patriots are solid 4.5-point favorites to whip the Philadelphia Eagles in Super Bowl LII. According to Bovada, the moneyline on the Pats is -175. New England quarterback Tom Brady is listed as the -110 chalk to earn the honors as Super Bowl MVP. Everything is pointing toward a sixth Super Bowl win for the Patriots in 17 years, and with it, undisputable status as the greatest dynasty ever assembled in the history of the NFL.

Just look at the numbers they've assembled since 2001. The Patriots just played in their seventh straight AFC Championship Game. They've won 15 AFC East Division titles in 17 years. A triumph over the Eagles and they will join the Pittsburgh Steelers as the only NFL teams to win back-to-back Super Bowls on two separate occasions. They've assembled a .769 winning percentage over that span of time, and have won at least 10 games in 16 of the last 17 seasons. 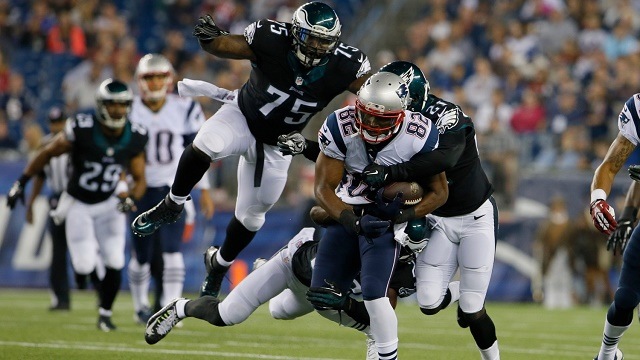 While there's no doubting that the Bill Belichick-coached era of New England football is the NFL's most dominant, the question were are asking here is how do these great Pats stand up against the most legendary teams from the other major North American sports?

Let's take a look at that and weigh the odds.

When the conversation is about the greatest dynasties of the diamond, the talk always begins and ends with the New York Yankees. While the Bronx Bombers have assembled several sensational eras, the one that takes the cake in terms of dynastic measure are the Yankees from 1949-65. The Yanks appeared in 14 World Series during that span, winning nine Fall Classics. During that 16-season run, they never endured a losing campaign and finished lower than second once.

Between 1957-69, the Boston Celtics of Bill Russell and John Havlicek won 11 NBA championships, including eight in a row from 1959-66. The Celtics played in the NBA finals 12 times in that 13-year span. They finished first seven times and won at least 50 games in eight of those seasons. Not to be outdone, the Michael Jordan-led Chicago Bulls won six NBA titles between 1991-98. That impressive run of success included a pair of title threepeats, something no NFL team has achieved in the Super Bowl era.

If the Yankees wore skates, they'd be the Montreal Canadiens. Like the Yankees, there are many eras of great hockey to choose from in the lore of the Habs, but their most powerful run of dominance came from 1956-69. Montreal won nine Stanley Cups in that time frame, and appeared in 10 Cup final series. They won a record five in a row from 1956-60. In fact, if you take it back to 1951, the Canadiens played in 15 Stanley Cup finals over a 19-year span.

You can argue that stock car racing isn't a team sport, but you'd be wrong. From the driver to the crew chief to the pit crew to the engineers who design the car, it's a group effort. And no group ever dominated like Jimmie Johnson and the No. 48 Lowe's Chevrolet. Johnson won an unprecedented five straight titles from 2006-10 and won seven times between 2006-16.

The Patriots are good - very good. What they've done between the hash marks is unparelleled - in football. But take it beyond their realm and they get beat aplenty. Both of the runs put together by the Canadiens and the Yankees dwarf New England's accomplishments. Ditto for the Celtics. You can argue that the Bulls and Johnson didn't do it for as long as the Patriots, and we'll give you that.

But if you try to make a case for the Patriots as the greatest sports dynasty of all time, well, to borrow a baseball analogy, you'd be way out in left field.