The 49ers and the Browns are winless this season - the Browns at 0-8 and the 49ers at 0-9. Perhaps figuring they had nothing else to lose, last week the Niners called the New England Patriots to enquire what it would take to acquire five-time Super Bowl champion quarterback Tom Brady. It was reminiscent of a time in the 1970s when the Pittsburgh Penguins called the Boston Bruins to ask what it cost to pry Bobby Orr away from the NHL champions.

The answer? The entire Penguins franchise.

The 49ers settled for Patriots backup QB Jimmy Garoppolo but he won't get the start this week in a winnable game against the New York Giants.

As for the Browns, they make the short trip to Detroit to face the Lions. This being bad is nothing new to the Browns, who went 1-15 last season and are 4-36 in their last 40 games.

We know one thing for certain - the Baltimore Ravens, Kansas City Chiefs, Oakland Raiders, and Philadelphia Eagles won't win or lose this week. Each team is enjoying the bye. 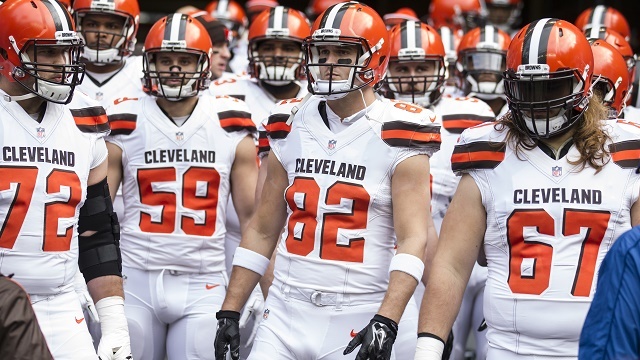 Here are all the Week 10 picks straight up and against the spread. The underlined teams, with their money line odds, are the straight up picks, based on odds provided by Bovada.lv.

Seattle (-250) at Arizona (+210) - To say the Seahawks are a confounding club would be an understatement. It what looks to be a very wide open race for the NFC berth in the Super Bowl LII, they keep stumbling when presented with opportunities to cement their status as the team to beat. But the Cardinals are a team that they can get well against. Russell Wilson will be able to pass at will and should rack up the yardage and points through the air.

Packers Will Grin And Bear It

Green Bay (+190) at Chicago (-230) - What could get the Pack back on track after three successive losses minus the injured Aaron Rodgers? Well, how about a game against a team with even more quarterback concerns than there are in Green Bay? Mitch Trubisky should out-mistake Brett Hundley in what figures to be a very sloppy contest. The Packers defense is depleted but is still capable at stopping the run, which will force rookie Trubisky to pass.

Pittsburgh (-550) at Indianapolis (+375) - They erected a statue of Peyton Manning in Indianapolis this season but the one thing that is written in stone when it comes to quarterbacks and the Colts, it's that Ben Roethlisberger will absolutely shred Indy. The Steelers QB has won four straight over the Colts, passing for 14 touchdowns and 1,471 yards in those four wins. Big Ben produced the gridiron version of the Indianapolis 500 in 2013, tossing for 522 yards and six TDs in a 51-34 win.

Minnesota (-120) at Washington (even) - After losses to the Eagles and Cowboys, the Redskins looked to be dead in the water, and then they upset the Seahawks last week. Playing a division leader for the third time in four weeks, can they come up big again? Minnesota's third-best NFL scoring defense has allowed just one team (Pittsburgh in Week 2) to score 20 points in a game. The Vikings have won two of three and seven of 11 from the Redskins, including a 26-20 decision last season at Washington.

Cleveland (+500) at Detroit (-800) - Matthew Stafford carved up the Steelers and the Packers defenses in successive weeks, so don't think for a minute that he isn't salivating at the chance to slice and dice Cleveland. Logically, with Cleveland coming off a bye and Detroit off a Monday night game, logic should favor the Browns, but logic never applies to the Browns. This is one time this season where the team from Michigan beats the team from Ohio on the gridiron.

Los Angeles Chargers (+175) at Jacksonville (-210) - The NFL's No. 3 defense is in contention to shatter the league mark of 72 sacks set by the 1985 Bears. Jacksonsville has sacked the QB 35 times through eight games, six times more than any other team. The Jags also expect to get RB Leonard Fournette back from injury. The Chargers had won three in a row and two straight on the road before their loss at New England. They will play Jacksonville tough but not tough enough.

Cincinnati (+185) at Tennessee (-225) -  A.J. Green and Joe Mixon give Andy Dalton two threats to torture a Titans pass defense that rates out as average at best. But Titans safety Kevin Byard has picked off six passes, more than the enitre Bengals team. The Bengals have so many holes on defense and special teams, and are unlikely to have much success dealing with Tennessee's vaunted running game, which has produced a league-high 10 rushing TDs.

New York Jets (-135) at Tampa Bay (+115) - After their big upset win over Buffalo a week ago Thursday, the well-rested Jets take their show on the road to face the Buccaneers squad facing life without injured QB Jameis Winston. Former Jets QB Ryan Fitzpatrick starts in his place, while ex-Buc Josh McCown is under center for the Jets. He'll win the revenge showdown, as his receivers feast on the NFL's third-worst passing defense. The Bucs surrender 272.4 yards per game through the air.

Bills Are Past Due

New Orleans (-140) at Buffalo (+120) - All good things must come to an end, as the Bills found out last week when they lost to the Jets. The Saints have won an NFL-high six in a row and haven't lost in Buffalo since 1983. But this has trap game written all over it. The Bills will be snarly after losing to the Jets, and LeSean McCoy and Tyrod Taylor could give the Saints fits. And it isn't often you get points by taking the Bills at home when the weather turns nasty.

Rams Are For Real

Houston (+450) at Los Angeles Rams (-700) - The skeptics keep waiting for the Rams to falter, and the Rams just keep on winning. They lead the NFC West, top the NFL in scoring and suit up the league's ninth-best scoring defense. Remember how bad the Texans offense was before they opted to start Deshaun Watson? Well, Watson's torn ACL last week dealt Houston a savage blow, because it meant the Texans had to once again turn to Tom Savage at QB.

Somebody Has To Win, Right?

New York Giants (-120) at San Francisco (Even) - If the 49ers are going to avoid an 0-16 season, this is certainly a game where they could stop the bleeding. But as bad as they've looked this season, the 1-7 Giants still have a capable offense, and Eli Manning is far superior to anything the 49ers have at QB. Yes, the Rams beat the Giants 51-17 last week. But the 49ers have dropped their last three games by a combined margin of 93-30.

Dallas (+125) at Atlanta (-145) - Ezekiel Elliott might or might not play. Dez Bryant might or might not play. And yet, while watching the Falcons self-destruct week after week, seemingly cursed to live some sort of Groundhog Day of their meltdown in Super Bowl LI, how can you put any faith in Atlanta? You can say that this is a must win for the reeling Falcons but in reality, last week's divisional game at Carolina was a must win and they managed to lose it.

New England (-320) at Denver (+260) - Think of all the epic Patriots-Broncos tilts you've witnessed in recent years and embrace that memory, because this isn't going to be one of them. That's not Brady vs. Manning, it's Brady vs. Brock Osweiler. Yes, the Broncos have a great defense and no, New England does not. But Bill Belichick has been given an extra week to prepare for this one, and are you betting against The Hoodie in that scenario?

Miami (+325) at Carolina (-450) - Cam Newton may not know the outcome of the Titanic but the Panthers QB is once again showing he knows how to win football games. Carolina is putting the game in his hands, and he's running and passing them to success. The Panthers are looking like a playoff team, while the Dolphins look like a team that missed Jay Cutler, and it doesn't get much more pathetic than that. The Panthers win a close one.