Will the Warriors have their way with the Spurs

Welp, the sportsbooks have spoken, and the returns aren't great if you're a San Antonio Spurs fan.

No one is expecting them to beat the Golden State Warriors. Not only that, very few expect this series to be all that competitive. The Warriors play fast and free, while the Spurs favor sloth-like paces. That can be a dangerous weapon against freewheeling teams that don't know how to adjust, but the Warriors know how to adjust.

Golden State was one of the best half-court offensive teams in the NBA this season. Take away its fast-break layups and pull-up threes in transition, and it'll beat you with a steady dose of Stephen Curry and Kevin Durant freelance projects, high pick-and-rolls followed by slashes toward the basket and kick-outs off drives and screens that ultimately find one of their many, many spot-up assassins.

Worst of all, for the Spurs anyway, you can only force the Warriors to play that way—great but out of their comfort zone—for so long. There are going to be nights when you miss shots—too many shots. The Warriors are the best team in the league at pushing the tempo following those misses, according to Impredictable. If the Spurs have a night when their mid-range jumpers are clanging off the rim and some of their shots result in long rebounds, the Warriors will run them off the floor.

That's the reality San Antonio's head honcho, Gregg Popovich, must reconcile from here on: How much do the Spurs cater to the Warriors' own style, and how much do they try and be the stylistic aggressors? 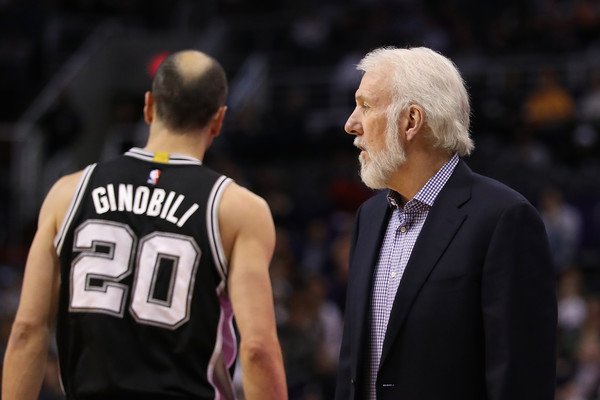 Balance is tough to strike in this department. The Spurs can hope to dominate the glass by continuing to start Pau Gasol alongside LaMarcus Aldridge, but that leaves them vulnerable on defense. It doesn't give them a ton of switchability, even when the Warriors aren't playing their "Death Squad" lineup that features Draymond Green at the 5.

More likely than not, the Spurs will need to play small themselves to have a chance in this series. Expect to see more Kawhi Leonard at the 4, with one of Dewyane Dedmon and Aldridge at the 5. San Antonio will then surround that resulting duo with some combination of Dejounte Murray, Patty Mills, Danny Green, Jonathon Simmons and Manu Ginobili.

Leaning heavily on Simmons and Green are musts at this point. If Leonard draws the Green assignment, the Spurs will need Green to check Kevin Durant and Simmons to check one of Klay Thompson or Stephen Curry. This, in all honestly, isn't a nightmare for the Spurs; they have the personnel to make that work. But this model still leaves one of Curry or Thompson free to detonate, unless Murray, Ginobili or Mills has the series of their life on the defensive end.

This all just roundabout way of saying these series odds are warranted. View the Spurs as a super-duper long-shot play and nothing more.

Meanwhile, if you're looking to make money off the Warriors, you'll have to do so with something other than straight moneyline gambits. Though these wagers aren't usually recommended, props that incorporate the length of the series can get you bigger paydays.

Consider this: The Warriors are a -1060 at most sportsbooks. That line could move in either direction a little, but that's a solid look at where they stand entering Game 1 on Sunday. If you bet on them winning in four games, though, the odds go to +314, according to Sports Interactive. That's not a great return for selecting such a specific outcome, but betting $100 to win $314 is so much better than betting $1,060 to win back a C-note.

And by the way: Picking the Warriors in six games, which is a nice way to endorse the Spurs without getting carried away, yields even better odds, at +351. Incidentally, that's also the route we're taking, independent of series-length returns. It's a risky play, but we're betting the Spurs make enough adjustments to surprise some people.