The Warriors will take down the Jazz in five

This is straight absurd. A -4000 favorite is ridiculous. It's inexplicable. Unbelievable. Unthinkable.

And yet, it makes total sense.

The Golden State Warriors have had ample time to rest following their first-round sweep of the Portland Trail Blazers. The Utah Jazz, meanwhile, are coming off a hard-fought seven-game set with the Los Angeles Clippers. Even if these squads were on equal footing, the Warriors would be heavier favorites just because they haven't incurred the beating that the Jazz have encountered.

But we're not talking about two equals here. We're talking about the Jazz, a solid, if unspectacular postseason squad, and the Warriors, perhaps the scariest team in NBA history.

That last part is not hyperbole. You need only look at the roster, and then at the way Golden State played without Kevin Durant.

In the 19 games he missed with a sprained MCL toward the end of the season, the Warriors were the statistical equivalent of a 61-win team, according to NBA Math. When he was on the court, they fared like a 62-win squad.

Think about that for a minute. As good as Kevin Durant is, he's worth maybe a couple wins to the Warriors, because they are so damn good behind him. Stephen Curry is the best safety net in basketball, Draymond Green is one of the best defenders in league history and Klay Thompson is automatic whenever he's allowed to play off the ball. Combine this with a bench that's far deeper and talented than anyone advertised at the beginning of the year, and the Warriors would sit in a position of power even if they didn't have Durant.

Except, they do have Durant. And, unlike the first round, he is at full capacity. The Jazz have no chance of slowing the Warriors' offense down enough to beat them four times in seven tries. They might be able to steal a game by displacing the Warriors from their comfort zone and forcing them to function predominantly in the half-court, but that's they're ceiling. They don't play fast enough or launch nearly enough treys to keep pace with the 110-point outings the Warriors churn out in their sleep.

On the bright side for Houston Rockets and San Antonio Spurs fans, the Warriors will feel their matchup with the Jazz, however long it lasts. Utah plays physical, and that could make Golden State a little more vulnerable in the Western Conference Finals. But that's the extent of what we're watching for in this series. 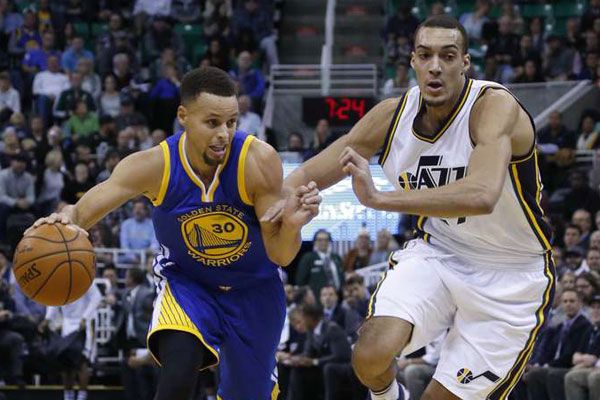 If you're looking to make money off this matchup without having to risk a crap ton of cash or place a small-time wager you know is going to lose, work the series length from two different angles.

First, and most likely, we have a Warriors sweep. Betting on them to win in four games gets you +135 odds, according to the BetOnline sportsbook. That's not great as far as sweep odds go, but it sure beats the -4000 the Warriors are laying as overall series favorites.

On the flip side, you could take an even larger risk and bet on the Jazz using a bruising defense to push the Warriors to six games. Bet on the Warriors in six, as opposed to five, you get +3300 on your wager. That's a great place to be.

It's highly unlikely, of course, a full-strength Warriors squad allows the Jazz to hang around that long. But hey, if the Jazz get the right defensive breaks and hit enough threes, you never know. Just make sure you're not betting the farm.