An impressive MLB best 56-33 first half record has moved St. Louis past the Los Angeles Dodgers and into a tie with the Washington Nationals as World Series co-chalk in the National League. The Cards preseason price has shrunk by 500 units, the Nationals have dropped 50 units, while the Dodgers line has remained unchanged. Though we’re not really sure why, and despite a mediocre 46-43 first half, the San Francisco Giants +1800 preseason line has been cut in half and the defending Champs are the fourth National League favorite. Pittsburgh closing in on the Cardinals and deserves respect.

Largely based on the belief that the World Series Crown will remain in the National League, we didn’t discuss the American League in our preseason prediction. Looking back on the Fall Classic futures odds posted at TopBet in early March, we are a little surprised by gaudy +2500 line Kansas City was tagged with. After putting up a 52-34 first half record, in what is proving to be a wild  American League, the defending AL Champion Royals are now the top overall favorite to win the World Series with +550 money line odds. The LA Angeles slipped to second AL chalk but retained their +1200 preseason price.

MLB 2015 World Series Betting Update: While we still like our 200 unit preseason wager on the Dodgers, we will improve our positioning with 200 unit wagers on the Cardinals and Washington plus a 100 unit wager on the streaking and pitching stacked Pittsburgh Pirates. Once our NL squads reach the playoffs, all four of them have a good shot at the six spots available, we will set up a guaranteed World Series payday and TopBet. If you agree with us – jump in now as these lines will begin to shrink as we move closer to the MLB Fall Classic in October. Act soon as these TopBet prices won't last. 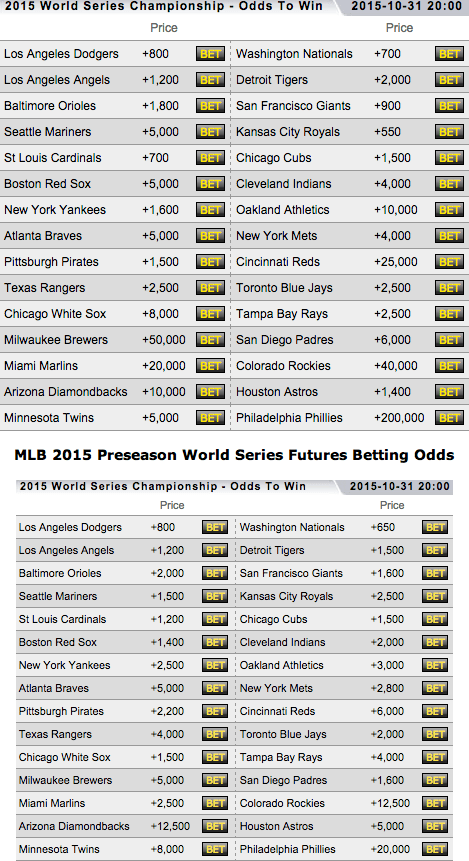 The boxing world unites once again as two legendary super-flyweight fighters go head-to-head when Juan Francisco Estrada takes on Roman "Chocolottito" Gonzalez in a huge trilogy bout. This time they'll be meeting with two titles on the line as The Ring and WBC super-flyweight belts are up for grabs in the Desert Diamond Arena in Arizona, having previously beaten each […]

The boxing world unites once again this weekend as two warriors go head to head in the heavyweight division as Tyson Fury takes on Derek Chisora for the WBC championship of the world. The two British fighters will go head-to-head for a third time, this time with the biggest crown in the sport on the line when […]

A wonderful NFL season continues into week 13 as the pretenders and contenders separate themselves, and we look at games between some excellent teams. In a highly entertaining season so far, this week we’ll look at three games involving the New York Jets taking on the Minnesota Vikings, the Tennessee Titans game with the Philadelphia Eagles and the […]

The FIFA World Cup in Qatar is finally upon us after years of anticipation and we're into the final group stage game where Iran will face the United States of America in a huge soccer game. It's the eighth time in the last nine World Cup's that the USA will be taking part in the […]