This matchup pits two of the hottest teams in the country. Oregon (31-5) have won ten of their last 11, the lone loss coming by three points in the Pac-12 championship. Meanwhile, Michigan (26-11) have won 12 of their final 14, capped by an upset of No. 2 Louisville in the round of 32.

Both team's hot streak has been keyed by unbelievable guard play. For the Ducks, Jack Dorsey has been on a tear the last five games. During that span, he's averaging 23.6 points — on an eye-popping 64.6 percent shooting (53.6 percent from three-point range). Derrick Walton Jr. has spearheaded the Wolverines, too. During the past 14 games, he's put himself on NBA Draft radars averaging 17.6 points, 7.1 assists, and 4.9 rebounds per game.

If not for an injury to Oregon's Chris Boucher two weeks ago, we'd pick the Ducks in this one. After all, Boucher's superior rim protection skills guided Oregon to a whopping 230 blocks this season, most in the nation. However, without him in the lineup, Michigan's efficient offense will exploit them. In a defensive slugfest, the Wolverines keep dancing. 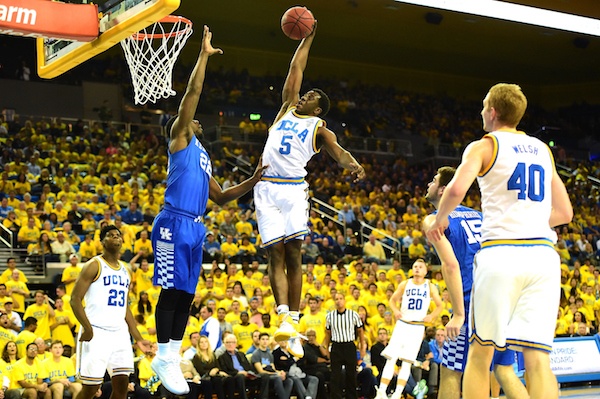 This is as juicy of a Sweet 16 duel you'll find and it's not the two's first meeting this season. Back in December, UCLA came into Rupp Arena and ended Kentucky's 42-game home winning streak. The rematch, this time on a neutral site, may prove to be an even more entertaining battle.

This game will be won and lost beyond the arc. The Bruins (31-4) are the nation's third-best three-point shooting team at 40.6 percent. During December's battle, they torched the Wildcats for 10 three-balls off 43.5 shooting. The defensive effort was a rare lapse for Kentucky (31-5) who have held opponents to a meager 30.5 percent from downtown — 12th lowest in the country.

UCLA has had one of the most prolific offenses all season long and we don't expect that to stop come Friday. Lonzo Ball will be the best player on the court during this matchup. No, he's not better than Michael Jordan as his dad claims, but Ball will make all the plays in this one to give the Bruins a close win.

No team has busted brackets more than South Carolina (24-10). After punching their ticket to the Big Dance for the first time in 13 years, the Gamecocks won their first NCAA Tournament game in 44 years by topping Marquette in the opening round. That was big. However, they followed that with a stunning upset of Duke, one of the national championship favorites.

Now, Baylor (27-7) is tasked with ending the historic run. Unlike South Carolina, this is a familiar stage. The Bears are appearing in their fourth Sweet 16 in the past eight years.

Expect a defensive showdown in this one. Baylor has held opponents to 63.5 points per game during the season, which ranks 21st best in the country. South Carolina's defense didn't trail far behind, giving up 65.2 points.

Everyone loves a Cinderella story, but the Gamecocks aren't just a flash in the pan. This team has flashed all year and it's finally now on display for everyone to see. Against Duke, they forced 18 turnovers and came down with 15 offensive rebounds. Those same hustle plays will propel them to the Elite Eight.