Perhaps a little too giddy, due to the success of our Super Bowl XLIX futures wager, we jumped on the SB 50 Golden Anniversary odds just two days after the New England Patriots rose like a Phoenix in the Arizona desert. Green Bay (+750) and Indianapolis (+1200) were our title game representatives back in February and, albeit not very healthy, they are both still breathing. Amongst other things, the Packers losing Jordy Nelson in the preseason and running back Eddie Lacy sucking, plus Andrew Luck playing horrible and then getting hurt, were impossible to predict ten months ago. Whether the Packers or Colts make the playoffs probably won’t be determined until Week 17 so we’ll keep our tickets safely stashed. Liking an NFC squad to win the Battle by the Bay in February - we are adding two teams here.

My how the numbers can change. Riding a 16-game regular season winning streak, including four wins to close out the 2014 NFL season, the Panthers (12-0) have gone from +4000 preseason kittens to the rulers of the lair as Carolina is now top chalk to claim Super Bowl 50 with a +500 money line price. Preseason NFC favorite Seattle (+600) has dropped to third with +850 odds while Arizona, who were tied with Carolina back in August, are now second chalk with a +550 money line. Green Bay (+900) rounds out the top four NFC Championship contenders. Despite all their injuries, New England is still top chalk in the AFC and their preseason line has dropped from +600 to +500. Denver (+700) retains second favorite status while Cincinnati has moved from +3500 to + 900 as third chalk. Pittsburgh rounds out the top four AFC contenders. If forced - the Bengals would be our AFC SB 50 choice.

NFL Super Bowl 50 Prediction Update: Keeping in mind that our 500 unit February futures bet was just 0.025% of our bankroll at the time - our Colts and Packers wager was justifiable and still has a chance to return a profit. However, being as we feel Carolina and Seattle are better options at this point, we are adding the Panthers (300 units) and the Seahawks (200 units) to our Super Bowl 50 futures betting stable. Being as these odds will continue to shrink moving forward – the best time to act is now. Click the odds image below to get in on NFL Championship futures betting at Sportsbook.ag! 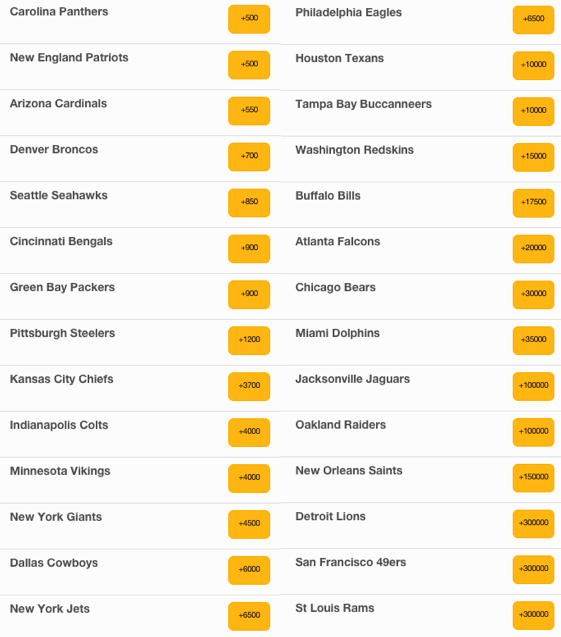