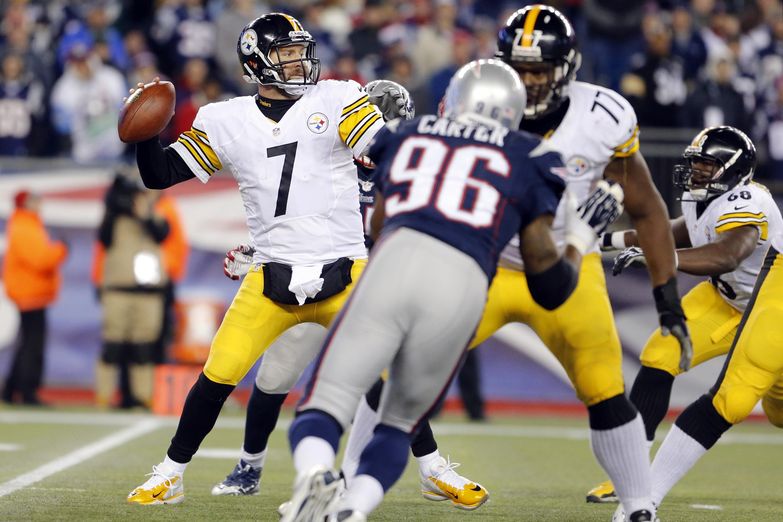 In what is absolutely no surprise, the 2015 NFL season will begin on Thursday, Sept. 10 at New England's Gillette Stadium when the Super Bowl champion Patriots host the Pittsburgh Steelers. NFL insiders long expected this to be the NFL Kickoff Game because the Steelers were the most marquee opponent available on New England's home schedule. Ben Roethlisberger vs. Tom Brady -- pretty good way to start  things off. The Pats likely will open as around a touchdown favorite.

Interestingly, both sides will be without a suspended running back from the same incident last year. Pittsburgh's Le'Veon Bell is suspended the first three games and New England's LeGarrette Blount one game. Last summer, when Blount was a member of the Steelers, they were pulled over with marijuana not long before the team was due to fly to Philadelphia for a preseason game.  Blount was cut by the Steelers in November due to unhappiness with his role.  He cleared waivers, joined the Patriots, and won a Super Bowl ring. Pittsburgh losing Bell is a much bigger deal than the Pats losing Blount.

This was a no-brainer choice as the Patriots' remaining home slate is: Eagles, Bills, Jets, Dolphins, Titans, Jaguars, and Washington, none of which made it to the postseason in 2014. The Patriots are +350 AFC favorites on 5Dimes with Pittsburgh at +1300.

Pittsburgh and New England last played Nov. 3, 2013, at Gillette. The Patriots won 55-31. Brady threw for 432 yards and four touchdowns. Three Patriots had more than 100 yards receiving, Rob Gronkowski's 143, Aaron Dobson with 130 and Danny Amendola with 122. The 55 points were the most scored ever against the Steelers. The Patriots' 610 yards were the third most in team history and the most ever allowed by Pittsburgh. Roethlisberger completed 28-of-48 passes for 400 yards, four touchdowns and two interceptions. Big Ben turned the ball over twice on his first two series when he fumbled then threw an interception.

The bright side for Pittsburgh in opening with the Patriots is that they are typically slow starters to the season, and the Steelers could possibly take advantage of those slow starts by stealing one on the road early. On the negative side, outside of the Baltimore Ravens getting beaten in Denver against the Broncos following their Super Bowl win a couple of years ago, the reigning Super Bowl champions are extremely difficult to beat in the season opener the following year. Plus the Steelers are 0-4 without Bell  in the lineup. Brady also owns the Steelers, especially at home.

The league also leaked out the Thanksgiving night game: Bears at Packers. The national game will draw extra attention as the Packers will place Brett Favre’s name and number into the team’s ring of honor during a ceremony that night. Favre’s number officially will be retired in a ceremony at the Packers Hall of Fame on July 18. Favre was very successful against the Bears in his career, owning a 22-10 record against them. His successor Aaron Rodgers is 12-3 against the Bears.

The FIFA World Cup in Qatar is finally upon us after years of anticipation, and we're going to look at the United States Men's National Team's clash with England in their second game in Group B to provide you with some soccer picks. It's the eighth time in the last nine World Cup's that the USA […]

A wonderful NFL season continues into week 12 this week as we prepare for our traditional Thanksgiving Day games between some excellent teams. In a highly entertaining season so far, this week we’ll look at three games involving the Dallas Cowboys taking on the New York Giants, the Buffalo Bills game with the Detroit Lions […]

The FIFA World Cup in Qatar is finally upon us after years of anticipation, and the United States Men's National Team will take on Wales in their opening soccer game in Group B. It's the eighth time in the last nine World Cup's that the USA will be taking part in the group stages, but for the […]

The FIFA World Cup in Qatar is finally upon us after years of anticipation, and the hosts will take on Ecuador in the opening soccer game of the competition this Sunday. It's the first time ever that Qatar will take place in soccer's ultimate competition, while Ecuador compete at a World Cup for the fourth […]