If you were picking a winner of this playoff series between the St. Louis Blues and Minnesota Wild in January, you would have been wild for the Wild. The Blues were mired in the blues but since former Wild coach Mike Yeo replaced Ken Hitchcock behind the bench on Feb. 1, St. Louis has marched to the beat of a much more successful drummer.

A breakdown of the series, with odds provided courtesy of TopBet.eu: 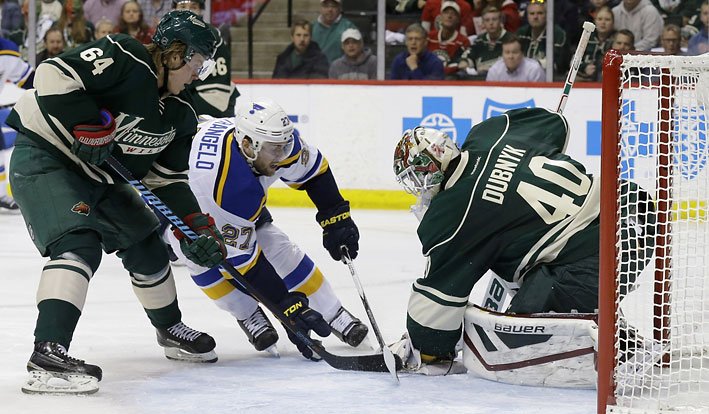 Since Feb. 1, St. Louis is an astonishing 22-8-2, tied with the Washington Capitals for the NHL's best record over that span, and the +33 goal differential posted by the Blues is tops in the league. Goalie Jake Allen was a key to the turnaround, going 16-7-2 over that time frame and Allen's .938 save percentage in that span was the best of NHL goalies who started at least 10 games. Goaltending has proven to be the achilles heel for the Blues in recent springs but Allen looks poised to be a difference maker for St. Louis this season.

It's about depth of scoring for the Wild. Five Minnesota players scored 20 goals this season, eight hit for 15 and an even dozen Wild potted at least 10. Defensively, Minnesota is also deep in point producers. Three defensemen contributed a minimum of 30 points and a pair of defenders fired 10 goals. Production from the back end can prove to be a tipping point in a series.

The Wild set franchise records with 49 wins and 106 points but they slid badly down the stretch. Even with a four-game winning streak to finish the season, Minnesota was 7-10-2 in its last 19 games.

A big concern for the Wild is that they rely on a few players to log most of the load. Defenseman Ryan Suter played an 26:55 per game during the regular season, the highest of any player in the playoffs, and that generally jumps up to 30 minutes in the playoffs.

Goalie Devan Dubnyk appeared in 65 games, 63 of them starts, and looked to be running out of gas toward the end of the season, enduring a 6-11-2 skid.

The one guy who could swing this series though is St. Louis gamebreaker Vladimir Tarasenko. Yeo increased Tarasenko's ice time by about two minutes per game and he responded by scoring 17 goals for his new coach, third-best in the NHL after Feb. 1.

It will be up to Minnesota center Mikko Koivu to try and contain Tarasenko, who averaged 7.9 shot attempts per game, among the best in the NHL. But Koivu supresses shots at a rate of 5.4 per game, also making him a league leader. Whoever wins this one-on-one battle could win the set for their team.

The Wild own a reputation as a boring, defensive team, but that was the old-school Wild. Minnesota scored 263 goals, second-best in the NHL and led the league with 187 five-on-five goals. The Wild went over in 42 games and were consistent in this stat, doing it 22 times at home and 20 times on the road. But the Wild scored two or fewer goals in 11 of their last 21 games.

Advice: Play the under