After the Giants nipped the Nationals on Friday, today we preview Game 2 of the Washington vs San Francisco NLDS battle. One primary factor has us believing that this series will move to the Bay Area tied at one game apiece. It's a twilight start in the District as the first pitch flies at 5:37 PM ET on October 4, 2014, from Nationals Park in Washington, D.C. Roll with the Nationals in this contest.

Following a low scoring opener, the Nationals look to get their offence in gear after they managed just six hits - two of which were bases empty home runs - in a 3-2 loss to the Giants yesterday. Washington averaged 4.2 runs on 8.6 hits per game during the regular season. Jake Peavy was super sharp for the Giants yesterday but, as we explain below, the Nats are up against a struggling starter today. RHP Jordan Zimmerman (14-6 ERA 3.55) who fired a no-hitter during a 4-0 win over Miami on the last day of the MLB regular season, heads to hill to help the Nationals earn a 1-1 series split.

Mirror opposite to the Nationals, the Giants piled up 12 hits but managed just three runs - all on RBI singles in three different innings. Things get interesting today as RHP Tim Hudson (9-13 ERA 3.57) heads to the bump for San Francisco. Hudson has been gas can on the hill over his last five starts as he allowed 23 runs (21 earned) over 21.2 innings pitched in September. The Giants lost all five games by a 47-11 combined final count. There is some hope though as Hudson limited the Nationals to three runs (one earned) over 12.1 innings in two San Fran wins during MLB 2014 regular season action.

NLDS Game Two Call: We loaded up against Hudson with our Dodgers vs Giants prediction back in September - albeit with Clayton Kershaw on the hill for Los Angeles. While Zimmerman, or any pitcher for that matter, is not in the same stratosphere as the Krushinator - Hudson is a gas can until he proves he can pitch again. Respecting the Giants deep batting order, our wager is 500 units on the Nationals using the money line posted on the betting board at the betonline.ag sportsbook. 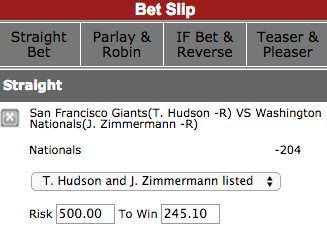