With the NL Wild Card game complete, and with apologies for our Pittsburgh call, today we preview and predict the National League Division Series that open on Friday. Washington vs San Francisco gets the action going at 3:00 PM ET at Nationals Park prior to St. Louis facing Los Angeles at Dodger Stadium at 6:30 PM ET on October 3, 2014. We like the California Crews in both of these series.

Runaway winners of what turned out to be a very weak NL East, by a whopping 17 games, and owners of the best record on the senior circuit, Washington (96-66) has home field advantage throughout the National League playoffs. Fresh off their 8-0 pounding of Pittsburgh in the NL Wild Card game, San Francisco (88-74) looks to keep their "even year" World Series roll on track as the Giants won the Fall Classic in 2010 and then again in 2012. The Nationals won the season series by a 5-2 count.

Los Angeles and St. Louis meet in the MLB playoffs for the third time in six years when the second half of the NLDS opens in SoCal tonight. The Dodgers swept the 2009 NLDS by a 3-0 count and the Cardinals won the NLCS 4-2 before losing to Boston in the World Series last season. It took some time for both teams to claim their pennants but the Dodgers (94-68) won the NL West on September 24th while the Cardinals (90-72) clinched the NL Central on the final day of the regular season.

NLDS Parlay Prediction: San Fran is a playoff tested crew while the Nationals played in a division that did not have a second team with at least 82 wins this season - the only division that didn't. Though the pitching staffs are fairly even, the Dodgers are the better hitting team and LA is much healthier than they were a year ago. We are betting on the Giants and Dodgers to meet in the NLCS and we'll tie them together as NLDS winners with a 500 unit money line parlay at the TopBet.eu online sportsbook. 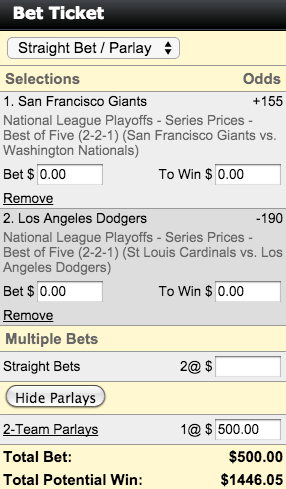