Real Penguins Should Show up For Game 2

Look For Pens To Bring Their Best

Other than Erik Karlsson, there's nothing sexy or spectacular about the Ottawa Senators, yet they just continue to get the job done. As the Pittsburgh Penguins found out in Game 1 of the Eastern Conference final, you can't take the Senators lightly.

Pittsburgh must be better in Game 2, or like the Boston Bruins and New York Rangers before them, Ottawa will put them down and out. Let's look ahead to Game 2, with odds provided by Bovada.lv:

Like a contender battling the champ for the heavyweight title, the Senators understand that they are ahead on the scorecards. They also recognize that it's very early in the fight, and that they've yet to be asked to withstand the defending champion's hardest punch.

After eking of a 2-1 overtime win in Game 1 of the Eastern Conference final, the Senators can expect to get the A-game of the reigning Stanley Cup champion Penguins in Game 2 at Pittsburgh's PPG Paints Arena.

In Game 1, Pittsburgh went 0-for-five on the power play, failing to score during four first-period man-advantage situations that certainly could have swung the game in favor of the Penguins. Captain Sidney Crosby and Phil Kessel, two of the top seven scorers in the playoffs, were relatively invisible. Evgeni Malkin, who scored Pittsburgh's lone goal, was again the best player on the ice for the Penguins, as he has been for much of these playoffs.

From Ottawa's point of view, there's much to feel good about after Game 1. Jean-Gabriel Pageau continued his torrid playoff scoring pace, with his eighth goal in 13 games. That's one goal every 1.625 games. Pageau scored 12 goals in 82 regular-season games. That's one goal every 6.83 games. The good Craig Anderson showed up and made 27 saves. And speaking of showing up, Bobby Ryan came out of the witness protection program and was flying all over the place, assisting on Pageau's goal and flipping home a backhander for the overtime winner. 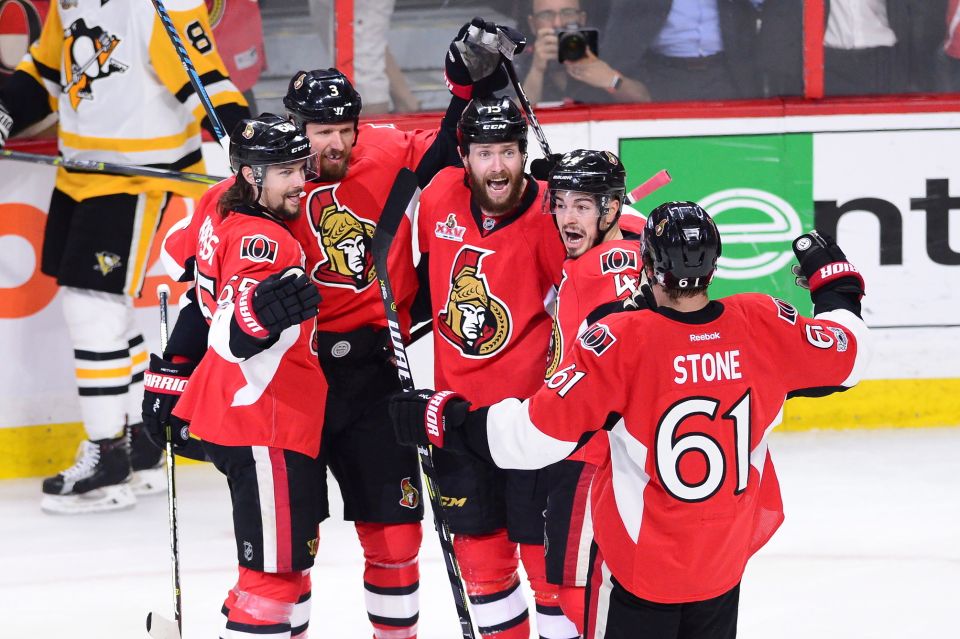 One advantage you might want to jump on quickly is that after their Game 1 loss, the Penguins are not listed by Bovada as the favorite in their Stanley Cup futures book. That honor now goes to the Nashville Predators at +175.

The Penguins are pegged as the second choice at +225 but you know once they start winning again, those odds willl decrease rapidly. That's quite a price to get on a defending champ in the final four. You ought to pounce on it quickly.