Rangers Find Their Game And Get Rolling

Rangers Step Up And Answer The Bell

The New York Rangers rolled through Ottawa in Game 3. Will the beat continue in Game 4, or can the Senators respond? We break it down, with odds provided courtesy of Bovada.lv:

The real New York Rangers decided to show up as this set switched locales to Madison Square Garden. The Rangers are at their best when they are playing an up-tempo pace, and forcing the play via an aggressive forecheck. That's what ultimately wore down the Montreal Canadiens in the opening round and it put the Senators back on their heels from the drop of the first puck in Game 3.

In shot attempts alone, the Rangers topped the Senators 26-12 in the opening period, a solid indication of the sort of dominance New York are capable of bringing to the ice when on top of its game. The Rangers made simple plays to get the puck deep behind the Senators defense and swarmed into the Ottawa zone tenaciously, forcing turnovers and creating scoring chances in transition.

When the Rangers roll four lines and maintain that sort of pressure and pace, they are a difficult team to beat. Each of their four lines produced a goal in their 4-1 victory and balance of scoring was evident in the fact that nine different New York forwards collected a point.

Rangers coach Alain Vigneault benched the defensive pairing of Brady Skjei and Brendan Smith in their Game 2 setback but increased the ice time of both defenders significantly in Game 3. Every New York defenseman played at least 14:29 and this balance helped the Rangers maintain a fast pace. Vigneault lessened the ice time of Marc Staal and Nick Holden, both of whom have struggled in the playoffs, in essence reducing them to his third tandem. 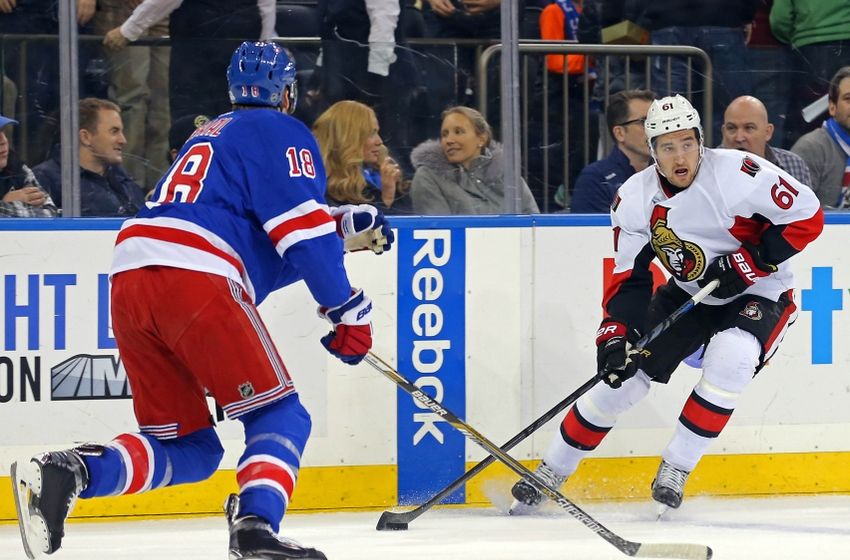 Playoff series are about adjustments and in the second and third periods the Senators did a much better job of dealing with the Rangers' persistence, matching their energy level and seeking a way back into the game.

Home ice, not so long ago a dreadful place for the Rangers - they'd lost six home playoff games in a row - is suddenly sweet again. The Rangers have won three in a row at Madison Square Garden. Only Nashville (four) owns a longer home-ice winning streak among the remaining eight playoff teams.

The victory also assured that the Rangers would not be swept and was the 21st consecutive postseason series in which New York has won at least one game, a franchise record.

Puckline wagering has the Rangers at +175 but you will be required to give a goal and a half. On the other hand, play the Senators at -210 and you will get a goal and half. Since two of the three games were one-goal decisions, Ottawa seems the wiser wager in this instance.

The 6-5 Ottawa win in Game 2 looks to be an anomaly in this series, so, with the total set at five for Game 4, you will probably want to look at an under bet worth -115.

If you think the Rangers' solid Game 3 triumph is a sign of things to come, you might want to play them in a Stanley Cup future wager. Bovada lists the Rangers at +1000 odds to win the Stanley Cup, ahead of only the St. Louis Blues (+2500) among the eight teams left in the hunt for Lord Stanley's mug.