Horses with an outside chance of rustling a few feathers

The Preakness Stakes is the second jewel of horse racing’s elusive Triple Crown and all eyes will be on Always Dreaming as he tries to move one step closer to making history. The front-running bay colt will have a big target on his back as both familiar rivals from the Kentucky Derby return and new, fresh foes line up to try to dethrone the champion. Though Always Dreaming will be the favorite once the field is set, there are several longshots who could make a step forward and spring the upset. 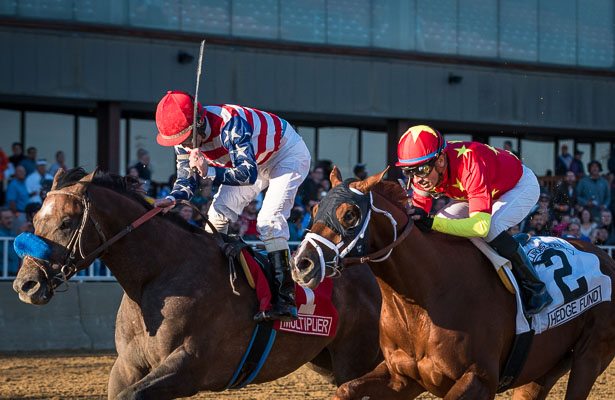 Multiplier is one of the more lightly raced horses in the potential field and will be making only his fifth career start.

Though very consistent, he broke his maiden in his third outing and followed that up with a sharp victory in the Illinois Derby. The Illinois Derby has not been a relevant race in the Triple Crown since Kentucky Derby and Preakness winner War Emblem used it as a stepping stone in his Triple Crown bid in 2002.

Multiplier will be in store for a significant class test at Pimlico. At this point, he is unproven and could be any kind so that alone makes him worth a look.

Conquest Mo Money began his career humbly at Sunland Park and rattled off his first three victories locally and impressively. He stepped up in class and, at his home track, ran second to Hence in the Sunland Park Derby. After that he really stepped into the big leagues and ran a gallant second to Classic Empire in the Arkansas Derby.

He has proven that he can really dig in and battle back when it counts and the decision to skip the Kentucky Derby and come into the Preakness Stakes fresh may prove advantageous. Good horses can come from anywhere, and while he does not have the hefty price tag as some of his rivals (he was purchased for only $8,500), he has passed every test so far.

Cloud Computing comes out for one of the hottest trainers in the country – Chad Brown. Though he is known more for his success with turf horses, there is no question he is equally adept at conditioning a dirt horse. Cloud Computing is another lightly raced contender here with only three starts. He broke his maiden in his debut and then hit the board in two New York-based Kentucky Derby prep races, the Gotham Stakes and the Wood Memorial. His third-place finish in the Wood Memorial was not flattered when Irish War Cry disappointed in the big dance in Louisville but his workouts since that race have been encouraging.

While Always Dreaming does look imposing going into Preakness Stakes week, no horse is unbeatable and there are plenty of scenarios in which Always Dreaming gets upset by a longshot.