Our Be A Bettor Better Crew has spent two weeks researching what we see as a compelling Super Bowl contest. Add in our wall to wall NFL 2014 regular season and playoff coverage and we have a solid handle on the battle for the Vince Lombardi Trophy. Seattle aims to become the first back-to-back Champions since New England turned the double in 2004 and 2005. New England, has dropped two straight NFL title games since then (2008 & 2011) and they are anxious to improve their franchise 3-3 Super Bowl record. They certainly don't want to join triplets of Minnesota (IV, VIII-IX, XI) Denver (XII, XXI-XXII, XXIV) and Buffalo (XXV through XXVIII) and form the SB Quad Losers Club.

A clock has started ticking on the Brady Bunch and the leaders of the family Bill Belichick, Tom Brady Vince Wilfork and Rob Gronkowski are now in a F**K You - It's Us Against the World mode. It's a role they have played and excelled in several times in the past. This cast of characters may not be Saints but they have been trapped by the judge, jury and executioner that is the out of control world of social media - report and vilify first - facts be damned. We cheated to crush the Colts? In the cross-hairs of the biggest microscope, under the most secure tent on the planet, front and center on the Global stage, one thing is certain, if New England gets up early in this game - they won't let off the throttle.

Seahawks vs Patriots Prediction: We soared with the Seahawks last season. Until the Super Bowl when we fell off the Seattle bandwagon and got dragged into the New jersey swamp by the Broncos. Though it took a couple of weeks longer than it should have, our first solid belief that New England would claim SB XLIX came back in Week 15. We see a lot more healthy play makers on the Patriots side of the field. Give us New England with a 200 unit wager on the spread price posted at TopBet. 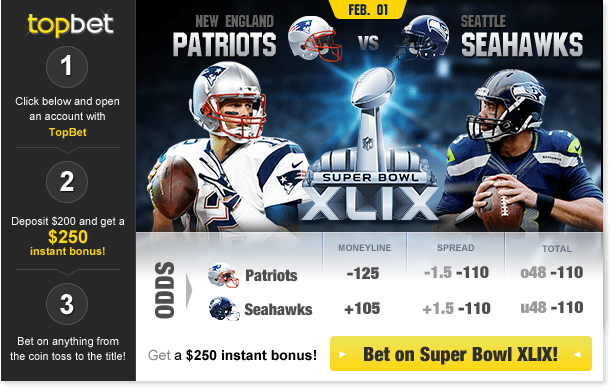