Rangers and Senators figures to be a track meet

Two Swedes figure to factor significantly in the outcome of this set. Who wins this battle between Rangers goalie Henrik Lundqvist and Senators captain Erik Karlsson? We break it down for you, based on odds set by Bovada.lv: 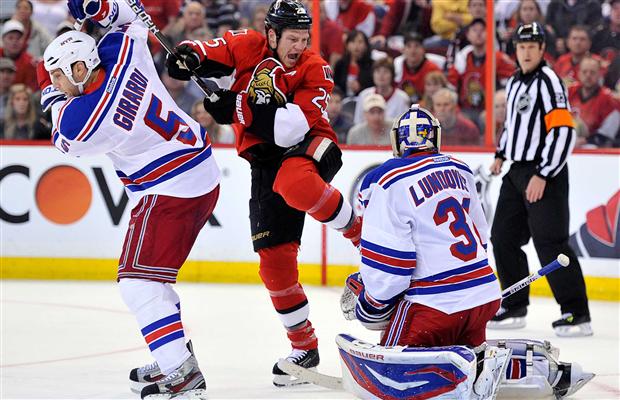 Once the Rangers ramped up the tempo of their opening round series with the Montreal Canadiens, the Habs couldn't keep up with the pace and faded, losing three games in a row. The Rangers won the only previous playoff meeting with this version of the Senators in 2012 but Ottawa is comfortable playing an up-tempo game and won't prove as easy fodder.

Ottawa won two of three regular-season meetings and outscored the Rangers 8-5 but the Rangers have won 10 of their last 15 games in Ottawa. Senators forward Clarke MacArthur, who missed all but four regular-season games due to concussion, scored twice in the Boston series, including the Game 6 series-clinching overtime winner.

The Rangers definitely enjoy the edge in goal. Henrik Lundqvist was outstanding in the Montreal series in winning his franchise-record 11th playoff series, posting a 1.70 goals-against average and .947 save percentage. With 59 wins, Lundqvist is one behind Turk Broda for 14th on the all-time Stanley Cup list. Ottawa's Craig Anderson is a solid goalie but also tends to be erratic. He'll throw a stinker in every three or four games and that could be the difference in this set.

Senators defenseman Karlsson was the best player on the ice in the Ottawa-Boston series. He averaged 30:23 per game and leads all defenders in the playoffs with six points.

A curious sub plot will be determining who won last summer's trade of forwards that brought Derick Brassard to Ottawa and Mika Zibanejad to the Rangers. Zibanejad led the Rangers with four points against Montreal and scored the Game 5 overtime winner for New York, while Brassard compiled team-leading 2-6-8 totals for the Sens in their opening-round takeout of the Boston Bruins but puzzlingly, finished only as an even player for the series. Four of Brassard's points came on the power play.

Stick with the under. It's the playoffs. Goals don't come easily.

Bovada lists Karlsson's point total for the series at five. He collected six in the Boston series and will need to be that dominant again for the Senators to have any chance at all. The puck has a way of finding him. Count on him going over and make that play at -115.

No one has ever confused Rangers forward Rick Nash with being a playoff dynamo and Bovada recognizes this. They've set Nash's series points total at 3.5. He collected three points against Montreal and had collected three or fewer points in seven of 12 career playoff series. Take the under at -115.

Pick: The Rangers in six games

Have a look at the 2021 College Football National Championship betting picks.