Checking out the most recent “Team to Win Super Bowl 50” odds at Bovada – we now have a four-way tie for top chalk. These revised lines reveal that bettors aren’t sold on the Pats defending their Super Bowl XLIX title. The Patriots have dropped from sole favorites, with a +450 price, into a tie with Carolina, Arizona and Seattle who all have +475 money line odds. While it’s true that New England has two weeks to get healthy – one has to wonder how they are going to rebuild their leaky offensive line. The Panthers and Cardinals also enjoy a bye this week while Seattle opens their postseason in Minnesota against the Vikings on Sunday. We like all three of those NFC teams over New England.

Due mainly to their QB situation, the Denver Broncos hit the board as fifth favorites (+625) to win the NFL title. Pittsburgh, with their potent offence, fall in as sixth chalk (-900) largely due to the Steelers defense being so suspect all season. Denver has a bye this week while the Steelers are headed for a rivalry showdown against AFC North rival Cincinnati (9th chalk) on Saturday. The odds drop drastically after the top six as Kansas City is the seventh favorite with a +1400 money line while Green Bay is packing a +2500 ML price. For various reasons, though largely due to an overall lack of talent, the Vikings (+3300) Redskins (+5000) and Texans (+6600) are the longshots to capture Super Bowl 50. 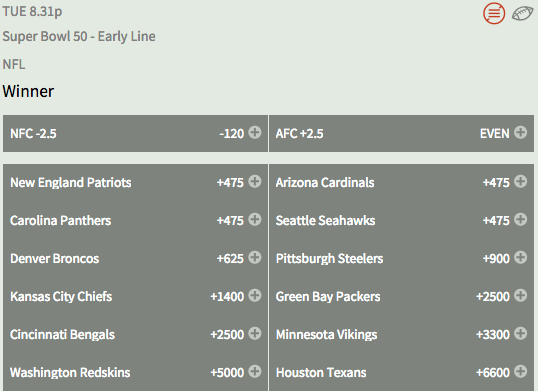