Jags Have Haunted Steelers Before

My Team's Next MatchPittsburgh Steelers

The expectation among the masses is that the AFC Championship Game will pit the Pittsburgh Steelers against the New England Patriots, which would be the fourth time that match-up played out since 2001. The Jacksonville Jaguars, for one, would beg to differ and with good reason.

During Week 5 of the NFL regular season, the Jaguars rolled into Heinz Field to face the Steelers - as they will this weekend - and left town packing a one-sided 30-9 triumph that left Pittsburgh a battered and soundly beaten bunch. Could it happen again? Well, in 2007, the Jags were 29-22 winners in Pittsburgh during the regular season, and then they returned to Heinz Field for a divisional round playoff game and edged the Steelers 31-29.

Those were Pittsburgh's only home losses that season. This season, the Steelers have dropped two home games, losing to the Jags and the Patriots. Will history repeat itself? Can the Jags turn a double play, or will the Steelers catch up to them in their second meeting at Heinz Field? We've got all the angles covered, utilizing odds offered by Bovada.

The memory of that Week 5 setback is seared into the minds of both Steelers players and fans alike. Pittsburgh quarterback Ben Roethlisberger was intercepted five times, and two of them were turned into pick sixes by the Jaguars. On offense, Jacksonville, the best rushing team in the NFL (141.4 yards per game) was able to play its conservative, ball-control style throughouth the contest, churning up 231 yards on the ground, getting 181 yards on 28 carries from rookie running back Leonard Fournette.

Jags QB Blake Bortles was forced to pass just 14 times, and the Steelers can't allow that to happen again. With an NFL-leading 56 sacks, they need to force Bortles to the air. But they will be without All-Pro linebacker Ryan Shazier and according to Pro Football Focus, his replacement Sean Spence grades out as the NFL's worst linebacker at stopping the run.

Pittsburgh will have right tackle Marcus Gilbert in the lineup. He was injured for the first Jacksonville game and his replacement Chris Hubbard couldn't handle the pass rush of the Jags, who were second in the NFL with 55 quarterback sacks and got to Roethlisberger two times, pressuring him all day. This development forced the Steelers to keep RB Le'Veon Bell in the backfield to help with pass blocking, eliminating his threat as a receiver out of the backfield.

The Steelers, 3-2 after that loss, can identify it as a turning point in their season, and for their up to that point struggling offense. Pittsburgh is 10-1 since losing to the Jags, and the Steelers have scored at least 20 points in 10 of those games. Roethlisberger has thrown 22 touchdown passes against seven interceptions over that span. But the Steelers still finished 22nd in the NFL in red zone TD conversions. The Jaguars were second overall. 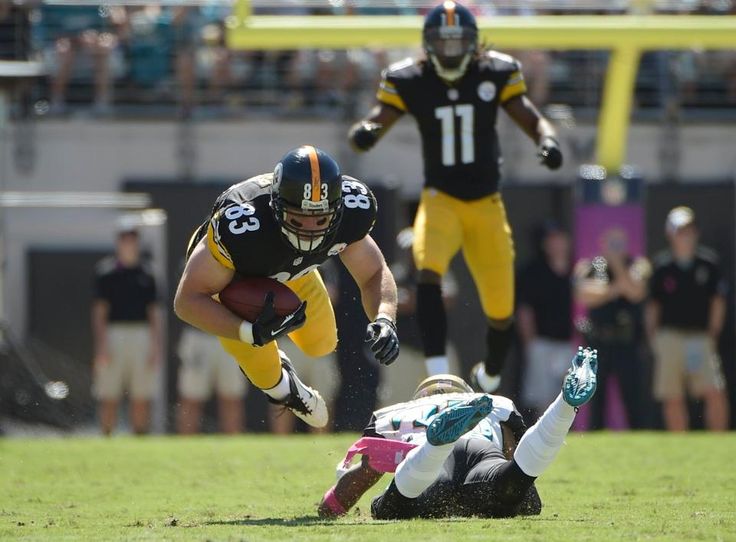 Going up against Jacksonville's second-ranked defense (286.1 yards per game), the Steelers will need a healthy Antonio Brown. But the NFL's leading receiver (1533 yards) has missed a month with a calf injury, and left practice Friday fighting illness. He's listed as questionable. The Jaguars were the NFL's best pass defense (169.9 yards per game) this season.

That 30-9 win over Pittsburgh is among eight games this season that Jacksonville has allowed fewer than 10 points, an NFL high. The Jaguars were also second in the NFL in interceptions (21) and third in forced fumbles (17).