Not so long ago, the New Orleans Saints were the talk of the NFL, steamrolling their way through the league while enjoying an eight-game winning streak. But they are just 2-2 since the streak ended, including a 20-17 loss to the Falcons at Atlanta. As those two teams meet Sunday at the Mercedes-Benz Superdome, both teams hold destiny in their hands. Win out and the 10-4 Saints capture the NFC South. Likewise, if the Falcons sweep their remaining two games against the Saints and 10-4 Carolina Panthers, the division is theirs.

The Falcons have a bit of recent history in their corner, because in each of the past four seasons in five of the past six campaigns, the team that won the first game between the Falcons and Saints has also won the second game. In winning two straight and five of their last six, the Falcons haven't been overpowering, posting three of those five victories by scant three-point margins, but a win is a win, especially at this time of the year. 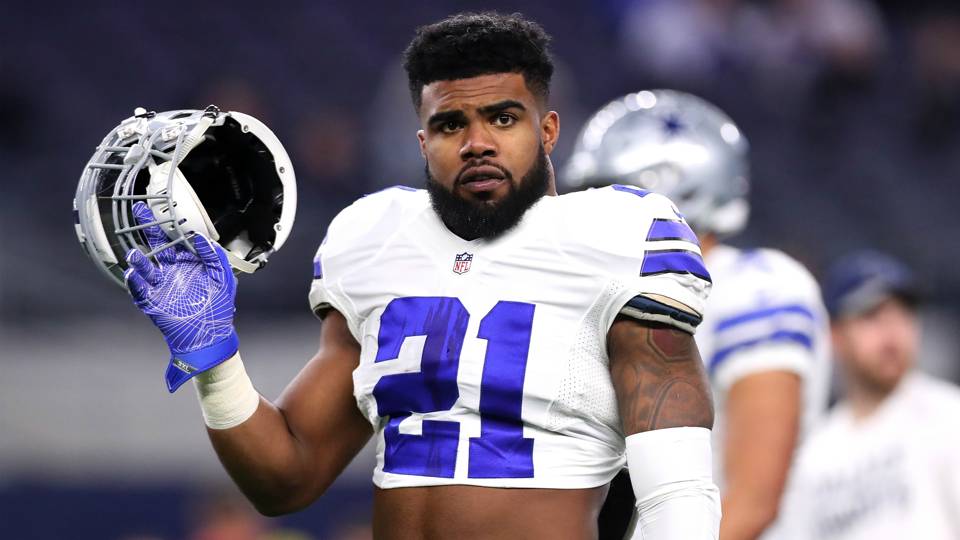 The surging 8-6 Dallas Cowboys, who have scratched and clawed their way back into the NFC wildcard race, will be bolstered this week by the return of running back Ezekiel Elliott from his six-game NFL suspension as they face the 8-6 Seattle Seahawks in a match-up with huge postseason signficance. Here are all the Week 15 picks straight up and against the spread. The underlined teams, with their money line odds, are the straight up picks, based on odds provided by Bovada.

Indianapolis (-525) at Baltimore (+850) - The Colts lost handily at home last week to the Denver Broncos, a team that came into the game 0-6 on the road this season and winless at Indy since 2003. Yes, the Colts are a very bad team. On top of that, they were the Baltimore Colts until they scurried off to Indy one night under the cover of darkness, so you know they will receive a heartfelt welcome from the Baltimore fans. The Ravens win out and they make the playoffs, so they will be more than ready.

Minnesota (-430) at Green Bay (+315) - A week ago, when Packers quarterback Aaron Rodgers returned from injury, it appeared that this game could hold serious playoff implications. Then the Vikings clinched the NFC North by beating the Bengals, the Packers lost to the Panthers, were eliminated from playoff contention and opted to shut down Rodgers for the year. Still, the Vikings need to keep winning to maintain a first-round playoff bye, so expect them to put a whipping on the Pack.

Buffalo (+450) at New England (-700) - The Patriots clinched the AFC East title and a playoff berth for a record-tying ninth season. The Bills, who haven't made the playoffs since 1999, the NFL's longest current drought, kept their postseason hopes alive with a win over the Dolphins. The Bills have two wins in their last three games at Gillette Stadium after going winless there from 2001-13. But New England has control of homefield in the AFC and Tom Brady doesn't lose big games in December.

Denver (+165) at Washington (-190) - The Broncos finally won a road game last week, but it was against the Colts. The Redskins aren't any good, but they aren't Indy-bad. Still, Denver has the NFL's No. 1 defense (276.8 yards per game), and Washington is 0-4 this season in games against teams rated among the league's top 10 defensive clubs. Denver has won two in a row, and the Redskins, coming off a victory, haven't won two in a row since Weeks 2-3.

Atlanta (+205) at New Orleans (-245) - It's easy to forget that the Saints were an end zone interception away from beating the Falcons two weeks ago. Prior to his current three-game losing skid, Saints QB Drew Brees was 8-3 against Atlanta. He's gone for over 300 yards in passing in six of his last seven games against the Falcons. Atlanta QB Matt Ryan is also hot, and the Falcons offense looks more like the record-setting lot of a year ago. This should be a real barn burner.

Cleveland (+230) at Chicago (-270) - Let's face it, this is it. The Browns either with this one, or they go 0-16, because there's no way they are winning next week at Pittsburgh. Cleveland has lost 19 in a row on the road, however. The Bears looked wonderful in beating the Bengals two weeks ago, but dreadful last week in getting thumped at Detroit. And wouldn't it be fitting for the end of the 9-23 John Fox era in Chicago to be punctuated by a loss to the woeful Browns?

Detroit (-235) at Cincinnati (+195) - Give the Lions credit. They know they desperately need help elsewhere to end up in the postseason, yet they remain focused on what they can control and just keep on winning - granted against bad teams like the Buccaneers and the Bears. The Bengals fit into this mold. Coach Marvin Lewis announced last week that he is leaving at the end of the season, but his team long ago had already departed.

Miami (+350) at Kansas City (-500) - Just when they looked to be legit by dumping the Patriots, the Dolphins remembered who they were and lost at Buffalo, ending their playoff dreams. The Chiefs also look to have remembered who they were - the team that started 5-0 - in wins their last two weeks to go back into the driver's seat in the AFC West. The Chiefs are 2-1 and averaging 29 points per game since coach Andy Reid handed off the play-calling duties to offensive coordinator Matt Nagy.

Los Angeles Chargers (-300) at New York Jets (+250) - The final score wasn't flattering, but the Chargers were in it against the Chiefs last week until the final quarter. Pro Bowler Joey Bosa and partner in crime Melvin Ingram have combined for 21.5 sacks and will torment Jets QB Bryce Petty, making just his sixth career start. Chargers QB Philip Rivers will rebound from an off-week, even without tight end Hunter Henry, out with a lacerated kidney.

Tampa Bay (-350) at Carolina (+500) - Things are a mess off the field in Carolina, where owner Jerry Richardson, embroiled in a sexual harassment case, will sell the team at season's end. Could this impact the 10-4 Panthers on the field as they look to lock up a playoff berth? It shouldn't, certainly not against the Bucs. The Panthers have discovered a running game (fourth in the NFL at 135.7 yards per game) to go with the X-factor that is QB Cam Newton.

Los Angeles Rams (-300) at Tennessee (+250) - Another week where we get to watch the free fall of the Titans continue its downward spiral. The Rams absolutely pummeled Seattle to take charge of the NFC West and they aren't about to stop piling it on. Certainly, Titans QB Marcus Mariota took notice of how the L.A. defense chased Seahawks QB Russell Wilson all over the place. It will be up to Tennessee's third-ranked run defense (87.2 yards per game) to find a way to contain Rams RB Todd Gurley (13 TDs).

Jacksonville (-210) at San Francisco (+275) - Might this be a trap game? The Jaguars are 4-2 on the road this season, but those losses were at the Jets and Cardinals, not exactly powerhouse squads. Still, it would be wise not to get caught up in the Jimmy Garoppolo hype. While the 49ers are 3-0 with Garoppolo as their starting QB, during those wins they've generated only three touchdowns while settling for 25 field goals. Over the same time, Jags QB Blake Bortles is 3-0 with seven TDs and zero interceptions.

Seattle (+185) at Dallas (-225) - Three straight wins for the Cowboys and an 88-41 edge on the scoreboard, and that was without Ezekiel Elliott. Impressively, the Cowboys are still third in the NFL in rushing (136.6 yards per game) even though Elliott's been MIA for six weeks. The Seahawks are 17th at stopping the run, allowing 4.1 yards per game and 112.9 yards per game. Seattle rates 20th at running the ball and the team's top rusher is QB Russell Wilson (521 yards).

New York Giants (+165) at Arizona (-190) - Two more teams that are hard to figure out from week to week. The Giants are in disarray, while the Cardinals are up and down like a yo-yo. Giants QB Eli Manning is likely auditioning for a job with another team for next season, so the two-time Super Bowl winner has something to play for. New York gave the Eagles all they could handle last week. The 29 points they put on the board was the biggest output of the season by the Giants.

Pittsburgh (-450) at Houston (+325) - The Steelers need to assure themselves of a first-round bye, if for no other reason than to allow Antonio Brown (calf), the league's best receiver, an additional week to heal. Tom Brady and Pittsburgh's Ben Roethlisberger (4,025 yards, 26 TDs) are the only QBs over 4,000 yards in passing so far this season. Meanwhile, the Texans are utilizing their third-string QB and missing four starters on defense.

Oakland (-315) at Philadelphia (+430) - Can you imagine how little the Raiders want to make this trip? Out of playoff contention, playing out the string, and headed into the stadium with the only fans who are crazier than their own fan base. Philly will clinch a first-round playoff bye with a victory. It's another soft touch for Nick Foles, the injury replacement for MVP candidate Carson Wentz under center for the Eagles. The only teams the Raiders have beaten in the last eight weeks are the Giants, Broncos and Dolphins.