NFL Picks Week 15: Is It Curtains For Pittsburgh Steelers?

Patriots Own The Steelers

Where do we start when discussing the dominance of the New England Patriots over the Pittsburgh Steelers? Whatever direction we choose to take, we know how the story ends, with a one-sided victory by the Patriots over the Steelers. That's the way it's gone in their last four meetings, in five of their last games and in four of the last five meetings between the two teams at Pittsburgh's Heinz Field. Pats quarterback Tom Brady is 7-2 against Pittsburgh, while Steelers QB Ben Roethlisberger is 3-6 lifetime against New England.

Brady is also 3-0 against the Steelers in the playoffs, so when it comes to big games against Pittsburgh, he comes to play. And this is a big game. The winner will hold the tie-breaker for home field in the AFC playoffs, and while you might think the Patriots are susceptible after last week's stunning 27-20 loss at Miami, the facts speak loudly that New England has Pittsburgh's number, and until that changes, only the Steelers faithful will wager against Brady and the Pats. 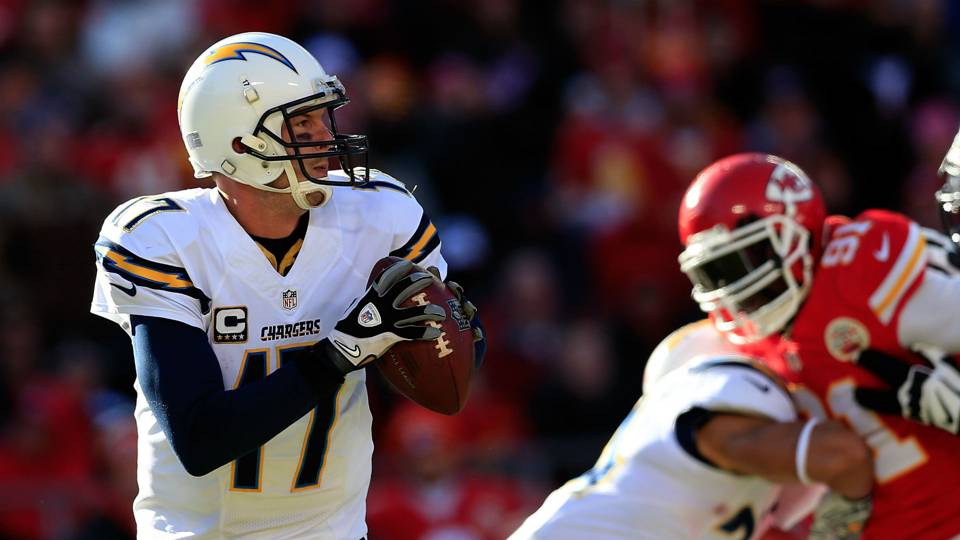 There's also major showdowns in the AFC West, with the Kansas City Chiefs and Los Angeles Chargers, tied atop the division at 7-6, meeting at Arrowhead Stadium, and in the NFC West, where the division-leading 9-4 Los Angeles Rams head to Seattle to face the 8-5 Seahawks. Here are all the Week 15 picks straight up and against the spread. The underlined teams, with their money line odds, are the straight up picks, based on odds provided by Bovada.

*Week Fourteen Record: 7-9 straight up, 9-7 against the spread

Denver (-145) at Indianapolis (+125) - On the surface, it's easy to like the Broncos in this one. They just ended an eight-game losing skid with a decisive 23-0 shutout of the New York Jets. But that was in Denver, and on the road the Broncos are roadkill. They are 0-6 away from home this season, just two losses away from becoming Denver's first winless road team since the 1964 Broncos. On top of that, Denver has lost six straight at Indianapolis since 2003.

Chicago (+200) at Detroit (-240) - The Lions cling to their thin playoff hopes, but their only hope is to run the table and get some serious help from other teams. They sit three games off the NFC North lead and two games out of a wildcard spot and lose almost all the tie-breakers. The Bears whipped the Bengals last week and came within a missed field goal of beating the Lions in Chicago. It will be close again, but Matthew Stafford and the Lions will prevail once more.

Los Angeles Chargers (-120) at Kansas City (even) - The Chargers have lost seven in a row to the Chiefs.  But they are 5-5 in their last 10 at Arrowhead Stadium and two of the losses were in overtime. The Chargers are the scariest team in the AFC right. Philp Rivers and company have won four in a row and are 7-2 since an 0-4 start to the season. Would you want to tangle with them in the playoffs? Expect Rivers to slice up the Chiefs suspect secondary.

Green Bay (+135) at Carolina (-155) - Aaron Rodgers is back. And by gutting out overtime victories over Tampa Bay and Cleveland, the Packers have kept themselves on the cusp of the playoff race while their MVP QB healed from a broken collarbone. It's still going to be a tall order for the Packers to extend their postseason appearance streak to nine consecutive seasons. The Carolina secondary is pedestrian and even a rusty Rodgers should pick them apart.

Philadelphia (-340) at New York Giants (+270) - The Eagles couldn't ask for a better introduction for Nick Foles as their starting QB in place of the injured Carson Wentz (torn ACL) than a meeting with the dysfunctional Giants. The 2-11 Giants have lost six of their last seven games and head to head, the Eagles have won 15 of their last 19 from the Giants. Philly figures to run more with Foles at the helm and the Giants are 24th in the NFL at defending the run, allowing four yards per carry.

New York Jets at New Orleans (no line) - The once-mighty Saints suddenly look vulnerable after losses to the Rams and Falcons. But after letting Atlanta off the hook last week, that might just be the wake-up call needed in New Orleans. On top of the that, the Jets will be without QB Josh McCown (broken hand) and coming off a 23-0 thrashing in Denver. Meanwhile, Saints rookie running sensation Alvin Kamara (concussion) insists that he will play.

Cincinnati (+400) at Minnesota (-600) - After an impressive performance in a heart-breaking loss to the Steelers two weeks ago, the Bengals gave off the impression that they were a heartbroken lot last week as they were throttled by the Bears. Cinci could prove the perfect elixir for a Vikings team seeking to rebound from their loss to Carolina and further cement their claim to status as the cream of the crop in the NFC. Their defense should take care of the Bengals and their offense will take advantage of a beat up Cinci defense.

Baltimore (-330) at Cleveland (+265) - The drive for 0-16 is alive in Cleveland and the Ravens will certainly do their part to keep it a reality. After letting a win escape their clutches last week in Pittsburgh, Baltimore will need to win out to assure there's a wildcard berth awaiting at season's end. Getting receiver Josh Gordon back bolsters the Cleveland offense, but the Browns own an NFL-worst minus-21 turnover ratio and have endured multiple turnover showings in each of their last five home games.

Arizona (+180) at Washington (-220) - Two teams that occasionally show signs of life, lately, the Redskins have headed significantly south with successive lopsided losses to Dallas and the Chargers. Washington has placed 19 players on injured reserve this season, and utilized 24 different starting combinations along its offensive line. If Cardinals WR Larry Fitzgerald catches three balls on Sunday, he'll reach 90 for the eighth time in his career, an NFL record.

Houston (+425) at Jacksonville (-650) - This was going to be a horror show for the Texans with back-up Tom Savage at QB. With third-stringer T.J. Yates in for the injured Savage (concussion) they might want to place a PG-13 rating on this game. The Jaguars lead the NFL with 47 quarterback sacks, and figure to have a field day. On top of that, Jags QB Blake Bortles is in a real groove of late and rookie running back Leonard Fournette has also rediscovered his mojo.

Miami at Buffalo (no line) - The 7-6 Bills have played themselves back into the playoff picture, and so have the 6-7 Dolphins after solid wins over the Broncos and Patriots. But those both came in the warmth and comfort of Florida. Can Miami take its show on the road and overcome the frigid conditions and lake effect snow of Western New York? The one thing the Dolphins have going for them is Jay Cutler at QB. The Bills don't know if Tyrod Taylor (knee), Nathan Peterman (concussion) or Joe Webb will be at the helm.

Los Angeles Rams (+115) at Seattle (-135) - There's no logical reason to bet on the Rams based on recent history. They are 1-10 in their last 11 at CenturyLink Field, but on the other hand, they did post a 23-17 win there in 2015. Already without defensive backs Richard Sherman and Kam Chancellor, Seattle linebackers Bobby Wagner (hamstring) and K.J. Wright (concussion) are uncertain starters and likely to be game-time decisions. Rams QB Jared Goff and RB Todd Gurley should romp through their replacements.

New England (-155) at Pittsburgh (+135) - As bad as Tom Brady's lifetime winning percentage is against Miami (.677), it is spectacular against Pittsburgh (.777). Since Bill Belichick became head coach, the Patriots are 10-3 against the Steelers. And coming off a loss at Miami, New England has dropped consecutive games just four times since 2011. As well, they get all-world tight end Rob Gronkowski back from suspension, and Pittsburgh's defense doesn't look the same minus injured linebacker Ryan Shazier.

Tennessee (+105) at San Francisco (-125) - The Titans have been exposed of late as more frauds than contenders, with a lopsided rout at Pittsburgh and a dismal setback last week against Arizona. The 49ers are 2-0 with Jimmy Garoppolo at quarterback and he is providing them clear leadership and field generalship. Overall, San Francisco has won three of four since starting the season 0-9. The Titans are treading water, 2-2 in their last four games.

Dallas (-160) at Oakland (+140) - A year ago, they would have billed this game as a duel between two of the finest young quarterbacks in the league - Dak Prescott of the Cowboys and Derek Carr of the Raiders. This year, they will bill it as a battle for survival, as the winner will keep their razor-thin playoff hopes alive. Faced with a chance to move into the AFC West lead, the Raiders rolled over and died last week in Kansas City. The Cowboys have been better of late and will keep it going.

Atlanta (-270) at Tampa Bay (+230) - Look out NFC, here come the defending champions. Facing a tough stretch of games, the Falcons went 4-1 in their last five, winning against the Saints, Cowboys and Seahawks, losing only to the Vikings. Last week's win over New Orleans began a run of four straight games against NFC South rivals and if the Falcons run the table and go 4-0, they will finish 11-5 and the division crown will be theirs for the second year in a row.