Although our handicapping crew is looking at October as Shocktober, after the Tigers and Angels were swept in the MLB American League Division Series, we are still relatively comfortable with our call for the Giants and Dodgers to clash in the NLDS. San Francisco can advance with a win over Washington while Los Angeles looks for a 2-1 advantage in their pivotal Game 3 battle versus St. Louis during Major League Baseball playoff action on October 6, 2014. This will be fantastic MLB Playoff action!

As we thought it would be when we made our NLDS prediction on Friday, being battle tested in the MLB playoffs is a huge advantage. Playing in their 35th postseason contest (25-9) in five seasons, San Francisco aims for a sweep of Washington as they hook up at 5:07 PM ET on October 7, 2014, at AT&T Park in San Francisco, CA. There's a ton of playoff pitching experience on display here as Giants LHP Madison Bumgarner (18-10 ERA 2.98) faces Nationals RHP Doug Fister (16-6 ERA 2.41) in the battle on the bump. Bumgarner is 4-2 allowing 15 runs over 44.2 innings in six playoff starts for SF while Fister is 3-2 giving up 16 runs over 48.1 innings in eight playoff appearances while with Detroit.

Cardinals vs Dodgers: Speaking of Shocktober - What hit us on Friday?

While a 10/10 is police jargon that translates to "fight in progress" it translated to ten runs, on ten hits, and a 10-9 win for the Cardinals over the Dodgers in their NLDS Game 1 fight on Friday. Some things can't be explained as Clayton Kershaw cruised into the seventh inning with a 6-1 lead and had retired 16 straight St. Louis hitters before a rare implosion. A Matt Kemp eighth inning home run and seven innings of two-hit shutout ball from Zack Greinke were the difference in the 3-2 series tying LA win on Saturday. Cardinals RHP John Lackey (14-10 ERA 3.82) faces Dodgers LHP Hyun-Jin Ryu (14-7 ERA 3.38) today. Give the edge to Lackey here as he has posted World Series clinching wins for the Angels (2002 vs SFG) and the Red Sox as he took down his current team in the Fall Classic last year.

MLB 2014 NLDS Predictions: We like the Giants to bring out the brooms at home in a close contest over the Nationals and they get a 300 unit backing on the money line posted on the betting board at the sportsbetting.ag online sportsbook. Since another one-run game wouldn't be a shocker in St. Louis we will back the Dodgers with a 500 run line wager as well. We'll round out today's betting card by tying those two bets together and adding the Seahawks -315 money line to the mix on a 200 unit three-team cross-sport parlay wager at the SportsBetting wagering website. It's an amazing time of the year isn't it? 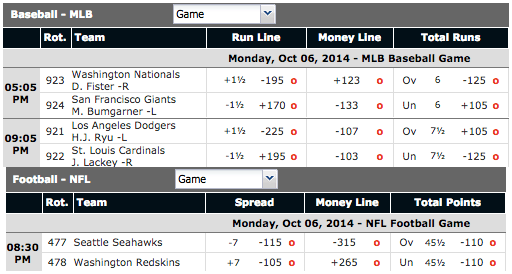