After adding former Cy Young award winner Max Scherzer, to an already stacked pitching rotation, the Washington Nationals have opened as the top favorite to claim both the National League Pennant and the 2015 MLB World Series. It's hard to argue against the TopBet bookmakers choice as Scherzer will be the ace of a pitching staff that also includes Stephen Strasburg, Jordan Zimmermam, Gio Gonzalez and Doug Fister. The Los Angeels Dodgers, who had a busy wheeling and dealing off-season of their own, and the perennial playoff contending St. Louis Cardinals round out the top three NL favorites.

LA Angeles of Anaheim: Open MLB 2015 as the top favorite in the AL

After being one of the top favorites to win the MLB Fall Classic for over a decade now - will this finally be the year the Halo's pull it all together? Having the reigning AL MVP Mike Trout in their line up is a good start. Former NL MVP Albert Pujous returning to a high level of play would also be a big boost for Anaheim. Young and improving, plus having ace Felix Hernandez in their pitching rotation, has moved the Seattle Mariners to second chalk status. Despite their 71-91 last place finish in the AL East last season - the revamped and retooled Boston Red Sox are the third favorites to claim the AL Pennant. 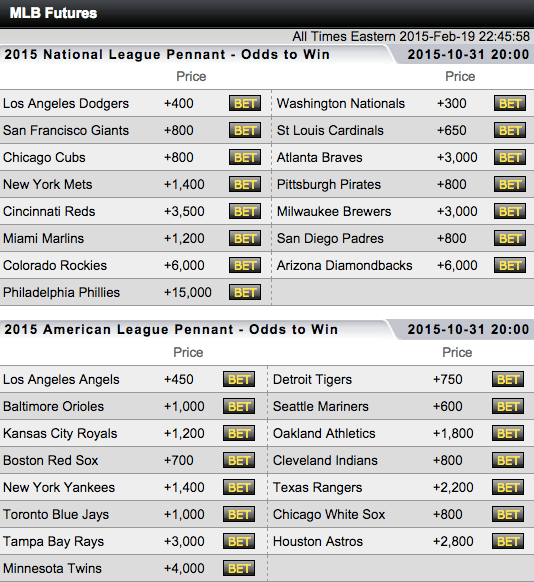