How Much Will McGregor And Mayweather Earn?

Floyd Mayweather and Conor McGregor are already two very rich fighters. McGregor earned close to $40 million during the 2016 calendar year, while Mayweather has a net worth that leaks into the nine figures. And both are about to get even richer off their August 26 fight in Las Vegas.

Early projections had Mayweather taking home around $100 million and McGregor earning $75 million. Those forecasts haven't exactly moved, but McGregor, for his part, is expecting to out-earn the benchmarks. As he told reporters on July 11: "If the pay-per-view clears the Mayweather and Pacquiao numbers [to become the biggest-selling fight of all time], then I'm making $100 million." 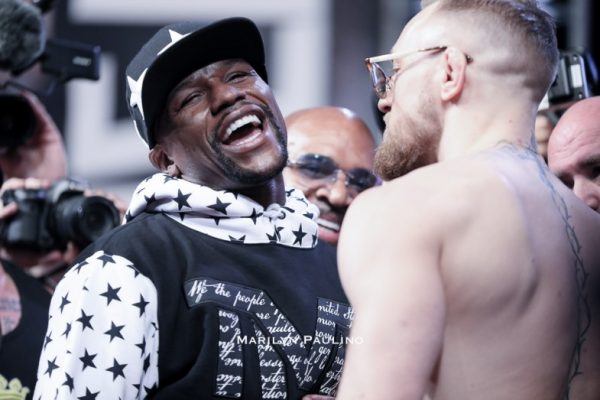 Pay-Per-View hits are the golden ticket here. The Mayweather-Manny Pacquiao fight brought in $455 million off PPV shifts alone, according to ESPN.com's Darren Rovell. The McGregor-Mayweather fight is projected to surpass that, settling in at, per Rovell, $475 million or more.

But there's no guarantee this fight matches the earning potential of that Mayweather-Pacquiao meeting, which became the highest-grossing sparring of all time and is now the one this latest competition will be measured against.

For one, PPV orders and ticket sales are far from guaranteed for any boxing match. And this one in particular is unpredictable, because it features McGregor crossing over from mixed martial arts. Interest will be high—perhaps high enough to break the PPV record. At the same time, because it's not a title fight, ticket sales may suffer by default.

It's not that the arena won't sell out, because it will. But general ticket prices, as Rovell notes, won't be nearly as high. And that'll impact the total bottom line.

As Rovell also pointed out, the fight may end up taking a bath at the sportsbooks. People aren't expected to wager as much money as they did on Mayweather-Pacquiao, which is believed to have topped $70 million in Nevada, according to Rovell. The absence of title intrigue, coupled with McGregor's unvarnished boxing skills, is going to drive down investments.

It doesn't help either that, as a result of all this, Mayweather is such a heavy favorite. According to Bovada, he is a -550 as of July 18. People aren't going to waste too much money on McGregor when he's such a stark underdog (+375); they'll make smaller bets. And most won't wager on Mayweather at all. It'll take too much of an initial investment to feel a potential return.

And yet, while this fight is might inevitably fall short of the Pacquiao-Mayweather spectacle, the Aussie media reported back in June that, when all's told, Mayweather should be able to earn $400 million—yes, $400 million—compared to McGregor's $127 million.

That $400 million would beats out the $250 million Mayweather reportedly ended up with after the Pacquiao affair, according to Forbes. The reason: Even though this fight may not ultimately gross as much, Mayweather has his own promotional company, which has a hand in everything.

If this event reaches or surprasses all of its financial goals, from ticket and Pay-Per-View Sales, to merchandise purchases and gambling benchmarks, he'll be rolling in coin.

So to answer the original question: Yes, this fight has the potential to break every record in the books. And Mayweather has a shot at shattering his personal-best earnings mark. It all comes back to how many people are enamored with and interested in paying for a cross-style clash between two of the biggest names from different sectors of the fighting scene.

And if all goes according to plan, we'll be hearing about a $400-plus million purse for Mayweather, and a $125-plus million take-home for McGregor.