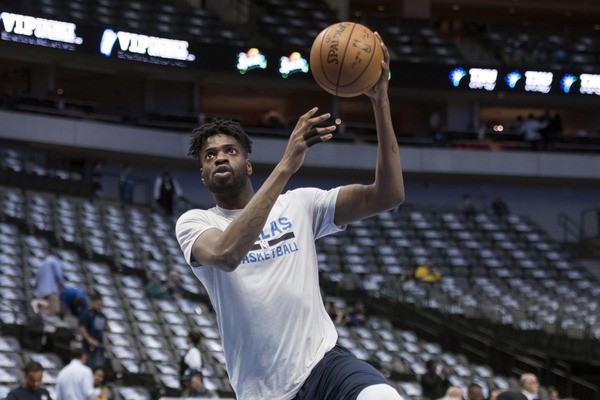 The Philadelphia 76ers just won't quit. Even though they are without Joel Embiid, they continue to blow up betting lines everywhere, with their backdoor covers and outright covers.

They would be a risk to do something similar against the Dallas Mavericks on Friday, particularly with Wesley Matthews on the injured list, if not for Nerlens Noel. The rangy tower was moved to Dallas, from Philly, at the trade deadline has had a profound impact on the Mavericks at both ends of the floor.

There is a clear learning curve in Dallas with Noel, but you see protracted stretches of what the team can be with him. That should get them by against this still-thing Philly team.

This line is a little generous on the Brooklyn Nets' behalf. They try incredibly hard and are working off an impressive victory over the New York Knicks, but head coach Kenny Atkinson isn't above handing out rest nights at the tail end of back-to-backs.

Plus, you know, the Boston Celtics are just a lot better.

Though the boys in green have been maddeningly inconsistent against inferior opponents, especially on the road, they are statistically one of the best teams in the league on both ends of the court when they're fully healthy.

And guess what? They're now fully healthy.

The Minnesota Timberwolves have been on fire since the trade deadline. They own a top-five net rating, which is the result of an 11th-place offense and sixth-place defense. But the defense has slipped a ton on the road during that stretch, and that's a problem.

Because the Miami Heat have been the best home team in the NBA since Jan. 17.

Only the Golden State Warriors have a better home-court net rating over this stretch, and they've played five fewer games in friendly territory. The Heat are outscoring opponents by a whopping 13.4 points per 100 possessions in front of their fans, posting a top-five offensive rating and top-three defensive rating.

While the Timberwolves profile as a worthy foe with the way they themselves are playing, we have to continue investing in what remains the NBA's hottest team.

The New Orleans Pelicans have been hot garbage on the offensive end since adding DeMarcus Cousins at the trade deadline. They rank 28th in points scored per 100 possessions and are 25th in three-point percentage.

If this game versus the Houston Rockets ends in anything other than a blowout, it will be a real surprise. They have the NBA's best offense since the trade deadline. They rank just 16th in three-point accuracy during this stretch, but they're still dropping in more than 16 triples per game.

So yes, this should be a one-sided affair.

No Eric Bledsoe. No Brandon Knight. No Dragan Bender. We cannot in good faith roll with the Phoenix Suns.

Make no mistake, the Suns have been scrappy. They've come up with some big-time performances against big-time opponents, and the Orlando Magic are an absolute wreck.

But, even with Orlando playing the tail end of a back-to-back, we have to go with individual talent. The Magic, bad though they are, have more threats in their rotation than the injury-ravaged Suns.

Break up the Milwaukee Bucks!

The Giannis Antetokounmpo-led squad has been off the chain of late. They are working off an impressively gutsy Wednesday night win over the Los Angeles Clippers, and they are now 7-2 in the month of March—during which time they're notching top-10 offensive and defensive marks.

As for the Los Angeles Lakers, they're just plain terrible. It's by design, but they're horrific. The idea of picking them over a healthy team that is actually trying to fight for playoff seeding is downright ludicrous.