Canadiens are cruising as leaders in the East

Earning at least a single point in 14 of 18 games, since the beginning of January, Montreal has moved into first place in the Eastern Conference. That said, it's a razor thin lead as six teams are within five points of the top perch - including Detroit who are just four points back and have a game-in-hand over the Habs. Montreal is on a 9-2-1 recent roll and they have played extra time in their past three contests. The last being a 2-1 shootout win over the steadily falling Maple Leafs at home on Saturday.

Not many professional sports teams can boast being anywhere near as consistent as the Detroit Red Wings. The San Antonio Spurs and New England Patriots (minus various shenanigans) come to mind, though they are both well off the pace. Detroit will make the playoffs for a 24th straight season and, unlike last year, it won't be a backdoor appearance. The Wings have earned points in 12 of their last 16 contests but lost 4-1 in Pittsburgh on Wednesday and 5-4 (SO) at home to Winnipeg on Saturday.

Red Wings vs Canadiens Call: There isn't much separating these two teams - in the standings or on the ice. Both squads play an up tempo game and they both defend well as the Habs sport a +25 GF/GA differential while Detroit's +21 mark is also solid. These teams have met five times in the last year and Montreal owns 4-1 advantage that includes 4-1 and 5-4 victories in Motown. Though it's a fairly steep price, we will take the pucks and cruise with the Canadiens with a 400 unit wager on the puck line odds at Bet Online. Click on the odds image below to access this sports betting legend. 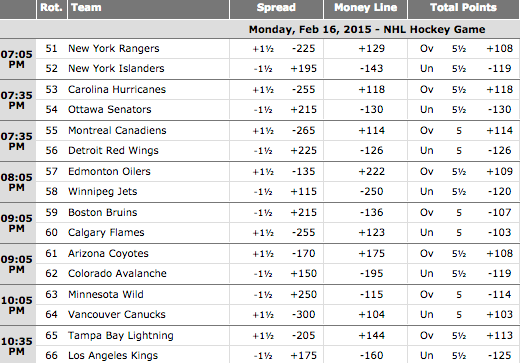