The November Meet at Cheltenham meet kicks off on Friday with six races, the last four of which are on offer in the future odds at Bovada's online racebook. To start the weekend, the course at Cheltenham has been rated good to soft.

Set to go off at 1:50 PM, the BetVictor Handicap Chase has a good field of nine four-year-olds and older being asked to run two miles. The top choice by consensus is Exitas (11-4) who has won the last three he has finished, and six of 28 lifetime. He may prefer a bit firmer ground. Doitforthevillage (7-1) is a Chase specialist with five lifetime wins in 13 starts.

A short but talented field of four will line up for the Steel Plate and Sections Novices Chase at 2:25. The heavy favorite at 2-3 is Finlan's Oscar, a winner of six of seven lifetime and the runner up in the other. Three of his wins come at the distance or more. In an accomplished group, William Henry (11-4) has been first or second in his last six. He'll be making his first start since April.

The stable of John McManus has a formidable trio in the 3:00 Glenfarclas Cross Country Handicap Chase, led by the early choice in Auvergnat (9-4) who already has a pair of wins on the year, but who might prefer a bit shorter. Back in March, Cause of Causes (5-1) beat stablemates Auvergnat and Cantlow, also in the field at 9-2. Cause of Causes was second in the Grand National at Aintree in April and makes his first start since.

Wrapping up the day at 3:35 with the Ballymore Novices Hurdle, Vision des Flos (5-2) and On The Blind Side (3-1) set themselves apart in the six-horse field as two that have shown lots of promise in their young careers, the first with a win and a third in two starts, the second won with conviction first try at hurdles in his last. Momella (4-1) also comes in on two consecutive wins, while Poetic Rhythm (13-2) beat Vision Des Flos last out and may offer a price. 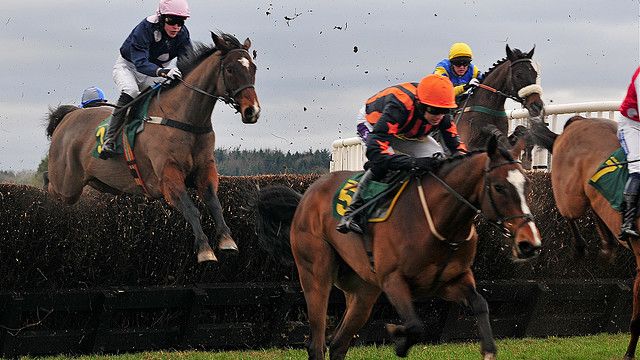 Turning to the Saturday feature, 18 have been entered in the BetVictor Gold Cup Handicap Chase, slated for the middle of the day's card at 2:25 PM. In a fairly wide-open event, Kylemore Lough gets the slight nod in the futures at 5-1, although he has not shown the same form in 2017 that saw him win seven races during 2015-16. In this field he seems a vulnerable favorite.

In better recent form is Foxtail Hill (7-1) who ran very well in his fall debut to win at 15-2 over a solid favorite in a two-mile Chase on the Cheltenham course, his third win in six starts on the year. The one he beat there is La Prezien also in here at 7-1, and there's nothing to say those two couldn't come back to run 1-2 once again. Guitar Pete (14-1) was runner-up in four straight before breaking through to win last out going away.

Also on offer in the Bovada racebook futures for Cheltenham's November Meet is the Greatwood Handicap Hurdle, which goes Sunday at 3:00 PM with a full field of 23 running just over 2 miles. Jenkins, at 4-1, was scratched from his last due to unsuitable ground, but won his 2017 debut back in April, running his record to three wins and a second in five starts. Misterton (9-1) has won three of the last four he finished, and was second in the other.

The Cheltenham Fall Meet gets underway Friday with six races, followed by seven more on Saturday, and six more on Sunday. First post Friday and Saturday is 12:40, Sunday starts at 1:15.