All odds courtesy of BetOnline.

In Game 2, Toronto countered Milwaukee's lockdown defense and gutted out a 106-100 victory. Kyle Lowry rebounded from a four-point effort in the Game 1 with 22 of his own. Still, the Bucks speed and length on the defensive front has rattled a normally prolific Raptors attack.

If Toronto wants to win back home-court advantage on Thursday, moving the ball around is priority number one. They need to create more space on the floor, whether that be from precision passing or pick and rolls. After shooting 14-of-29 from downtown in the last game, there's evidence the Raptors can punish the Bucks aggressive scheme that sometimes leaves players wide-open.

Giannis Antetokounmpo solidified his case as the best player in this series with another dominant, do-all game. He dropped 24 points, 15 rebounds, and seven assists. In front of an energized crowd, and with the Bucks confident they can pull off the upset, expect Milwaukee to come out firing on Thursday. In a close affair, the Bucks go up 2-1. 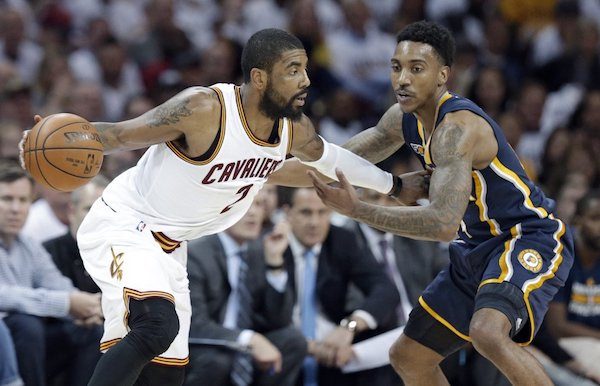 Have the Cavs forgotten how to protect a big lead late? Akin to Game 1, Cleveland's defense was gashed in crunch time, this time for 33 points, as Indiana narrowly missed an upset victory.

The defending champions defense is missing that killer instinct that won them an NBA title last year. Indiana is far from an elite NBA offense — they finished 15th in scoring during the regular season. However, they are having a field day so far in this series. In both games, they've shot over 50 percent and easily eclipsed the century mark in points.

Moreover, Paul George has been unstoppable. He's averaging a hair over 30 points in the series and is shooting 49 percent from the floor.

We're starting to believe this magic switch Cleveland is suppose to flip anytime now isn't working. Those defensive lapses will only be amplified playing on the road.

Thankfully for the Cavaliers, their offense has shown up this postseason — aside from fourth-quarter ghost moments. Kyrie Irving picked up the slack in the past game, as he went off for 37 points. A sore hamstring may sideline JR Smith in Game 3, so the pressure to score will be on Cleveland's big three.

The first two matchups have been overs, so we'll ride that trend in this one, too.

After back-to-back blowout wins by San Antonio, one by 29 and the other by 14, how on earth is the spread only four-and-a-half on this one? You don't get a lot of gimme lines all that often, and when you do like this one, you need to lay the hammer.

The Spurs are clearly in another league. Kawhi Leonard followed a 32-point outing in the first game with 37 points and 11 boards. He's feasting without Tony Allen, who will miss the whole series with injury, to guard him.

By now, you just have to realize San Antonio has Memphis' number. They swept them out of the playoffs a year ago — winning all four games by an average margin of 22 points — and it's looking like the Spurs will do the same this time around.

A less mature team would probably overlook an opponent after taking a 2-0 lead. But the Spurs are far from that. Gregg Popovich knows how critical rest is to a long playoff run and they want to get this series done with as fast as possible. San Antonio will roll again in game three.